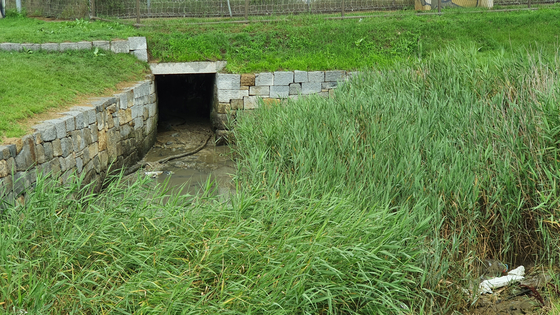 The drain in Ganghwa County, Incheon, through which a 24-year-old North Korean defector is believed to have used to escape to the North. [YONHAP]


A North Korean defector did return home several days ago, as claimed by Pyongyang Sunday, but whether he brought the coronavirus with him was not confirmed.

South Korea's military said Monday the defector probably swam through a drain to bypass barbed wire fences on the border, after being accused of raping a female fellow defector on June 12 at his residence in Gimpo, Gyeonggi.

Identified only by the surname Kim, the 24-year-old former defector left behind a bag at a location in Ganghwa Island, Incheon, where he is believed to have crossed, Col. Kim Jun-rak, spokesman for South Korea’s Joint Chiefs of Staff (JCS), said in a press conference.

On Sunday, North Korean state media announced the regime had closed its border city of Kaesong after a “runaway” who had previously defected to the South returned to the city on July 19 “after illegally crossing the demarcation line.” Several medical checkups for the coronavirus yielded “an uncertain result,” the Korean Central News Agency (KCNA) said, but prompted examinations and quarantine for all Kaesong residents who came in contact with the person.

Confusion reigned in Seoul Sunday as authorities in the Ministry of Unification, military and National Intelligence Service scrambled to verify the North’s claim that an individual had infiltrated one of the most heavily guarded borders in the world without detection.

The idea of such an escape sparked controversy in South Korea about the state of security and vigilance on the inter-Korean border at a time of revived tensions between the two countries.

According to the JCS, Kim was recognized as the subject of the North’s report based on identification found in his bag near a drain on the northern coast of Ganghwa Island.

The location in question is on the banks of the Han River estuary, but is closed off from the water by barbed wire fences that are closely monitored by border guards.

Seoul’s military investigators believe Kim did not cut through the fence but bypassed it altogether by swimming through a drainage system that ran underneath and flowed into the Han River, which he swam across to reach North Korean shores on the other side. The JCS said it was not clear exactly when that crossing occurred, but he is likely to have slipped across during the early morning on July 18.

South Korean police officially confirmed Monday that Kim was under investigation for allegedly raping a female fellow defector on June 12 at his residence in Gimpo. He denied the act at the time, telling police he was too intoxicated with alcohol at the time to remember what had happened.

A warrant has since been issued for Kim's arrest, police said.

The Gyeonggi Nambu Provincial Police Agency said it verified Kim had taken an acquaintance’s automobile to Ganghwa on July 17, then took a cab from that location to a nearby village the next day.

A police investigation into Kim’s movements only began on July 19 — by which time the former defector had presumably already arrived in Kaesong — after the acquaintance wrote on social media that Kim had left for Gyodong Island, which is adjacent to Ganghwa Island, after changing money into dollars, saying he wished to go back to the North.

Kim’s acquaintance said he warned police about Kim several times on July 18, but that police failed to act on the warnings.

Kim defected to South Korea in 2017 by swimming across a channel to Ganghwa Island, much the way he seems to have returned.

At its narrowest point, the estuary that separates South Korea’s Ganghwa County from the North’s South Hwanghae Province measures just 1.3 kilometers (0.8 miles) at low tide, which has led the area to be used as a crossing into the South by many defectors in the past.

After landing on North Korean shores, the former defector is believed to have somehow evaded the North’s coastal guards to reach Kaesong.


South Korean authorities said they could not verify whether Kim had contracted the coronavirus while in the South.

But the potential of an infection spreading into the North, which carries the potential to devastate the regime’s dilapidated health care system, prompted North Korean leader Kim Jong-un to declare a state of emergency for the virus at a Politburo meeting on Saturday, complete with a lockdown of Kaesong.

KCNA said the meeting also dealt with “the issue of loose guard performance in the frontline area where the runaway to the south occurred,” deciding “severe punishment” would be meted to those responsible.

Experts in Seoul noted the inconclusive results of the coronavirus tests on the defector meant Pyongyang could be playing up the risk of infection for political purposes. 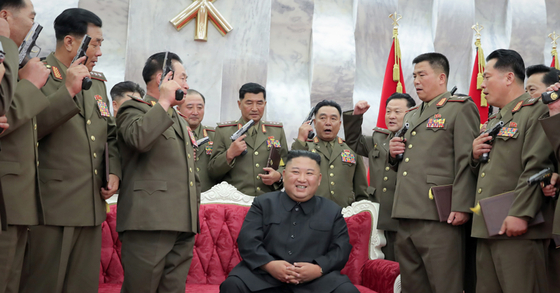 North Korean leader Kim Jong-un, center, poses with the North Korean army’s commanding officers during a ceremony at the headquarters of the Party Central Committee in Pyongyang on Sunday, to confer Mount Paektu commemorative pistols on them, in this photo released by the Korean Central News Agency. [YONHAP]


“[The North] appears to be using the occasion to strengthen its quarantine measures and control over the people,” said Yang Moo-jin, a professor at the University of North Korean Studies in Seoul.

A similar propagandistic intent was suggested by a KCNA report from Monday, which covered Kim Jong-un’s conferral of commemorative pistols on top commanders of the country’s armed forces in commemoration of the July 27 armistice that ended the 1950-53 Korean War.

The ceremony was likely meant to shore up Kim Jong-un’s support in the military, but stood out as it unveiled new units like the Guard Command, Guard Department and Guard Section, which are believed to be the personal bodyguard forces of Kim and the country’s top leaders.