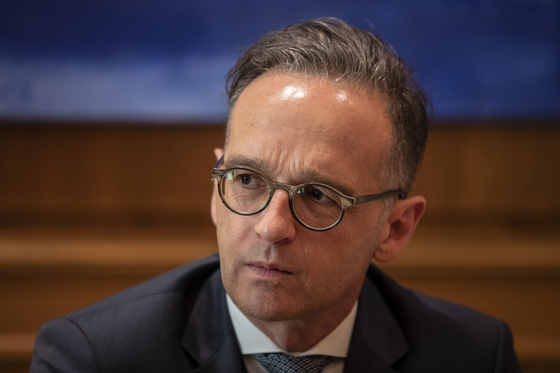 
Germany on Monday rejected U.S. President Donald Trump’s idea to expand the Group of Seven to include other countries, including Korea and Russia.

In an interview with a local newspaper, German Foreign Minister Heiko Maas made clear the country’s opposition against Trump’s proposal, floated in May to allow Russia back into the global network of the most advanced economies.

"The reasons for barring Russia were the annexation of the Crimea and the intervention in eastern Ukraine,” Maas said in remarks published Monday by Rheinische Post. "As long as we don't have a solution there, I don't see a chance [for Russia's return]."

Trump has said he wants to invite Korea — along with Russia, Australia and India — to a Group of 7, or G7, summit that the United States is slated to host this year. The meeting has been delayed until at least September due to the coronavirus pandemic.

Korea, Australia and India are among the U.S. allies in the Asia-Pacific region that Washington has tried to get on board with its Indo-Pacific Strategy, a Trump administration initiative seen as trying to contain China’s influence in the region.

Russia was expelled from the G8 in March 2014 after its annexation of Crimea from Ukraine. The G7 members are currently Britain, Canada, France, Germany, Italy, Japan and the United States.

Maas was also lukewarm about including other countries.

Germany’s rejection put a serious damper on Korea’s hopes to join the group of most advanced economies.

Last month, Trump invited Moon to the upcoming G7 summit, and Moon accepted it. According to the Blue House, Trump told Moon that the G7 is an outdated system that fails to reflect the current state of international affairs.

Korea’s participation means the group would be expanded permanently and the country would become a formal member, the Blue House said at the time, rejecting reports that the invitation is a one-off. Trump’s plan to expand the G7 to G11 or G12, however, requires approval from the current members.

Germany is the latest G7 member to oppose Trump’s idea to expand the G7. Britain and Canada already shot down the idea of restoring Russia’s membership. Those two countries, however, have not made a direct protest against Korea’s joining.

Japan, the only Asian country in the G7, has rejected the plan to include Korea. Japanese Foreign Minister Toshimitsu Motegi said late last month that it is important to maintain the framework of the G7 and the consensus of its current members.

The Blue House has been enthusiastic about Trump’s offer, calling Korea’s participation in a new global forum, if realized, a symbol of the country’s growing prestige.

During its weekly meeting on Thursday, the National Security Council also discussed a strategy to actively push for Korea’s participation in the expanded G7.

Moon’s possible trip to the United States to attend the upcoming summit was also discussed, sources in the Blue House said.