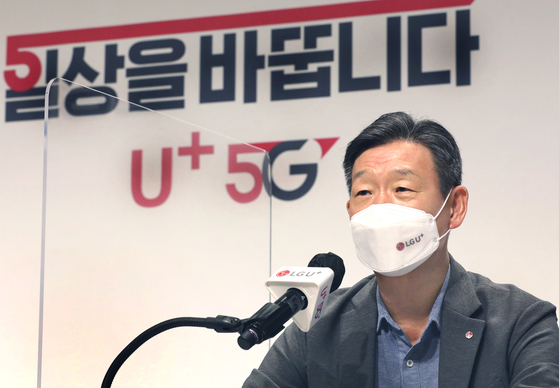 LG U+ Hwang Hyeon-sik speaks during a press event on Wednesday at company headquarters in Yongsan, central Seoul. [LG U+]


The new head of LG U+ downplayed security risks associated with Huawei network equipment, saying Huawei's products are not part of its core networks.

“As for the security concerns, we don’t use Huawei’s equipment for our core networks and manage the networks independently,” said CEO Hwang Hyeon-sik, who has headed Korea's smallest mobile carrier since March, at a press event on Wednesday.

Hwang was asked whether LG U+ will stick with Huawei as it builds a network for the 28 gigahertz band, an untapped 5G frequency spectrum.

But Hwang declined to give a direct answer about future supply contracts for Huawei, saying, “The investment for the 28 gigahertz band will be conducted by region and [the equipment suppliers] will vary depending on locations.”

LG U+ is the only Korean mobile carrier to use Huawei’s 5G equipment, which has put it in the sights of the United States government.

The U.S. government has been trying to wean telecom companies -- and entire countries -- off Huawei equipment.

Around 30 percent of LG U+’s 5G coverage nationwide is provided by Huawei telecommunications equipment, according to LG U+ CFO Lee Hyuk-ju in a conference call last year.

Industry analysts said that since LG U+ uses Huawei 4G LTE gear, it makes sense for the company to choose Huawei as a 5G vendor for compatibility between the 4G and 5G networks.

The CEO also outlined a set of strategies and goals for the company.

Most significant was a goal of increasing the company's non-telecom revenues to 30 percent of the total by 2025.

“The biggest part in the non-telecom area will be IPTV business,” Hwang said.

He went on to cite businesses related to smart factories and mobility as areas with potential.

He also touched upon an ongoing negotiation with Disney Plus.

“The discussion is going well, although it has not been finalized,” he said.

Disney Plus is set to arrive in Korea in the second half of this year and some Disney-franchised movies have already been withdrawn from local over-the-top (OTT) service providers.