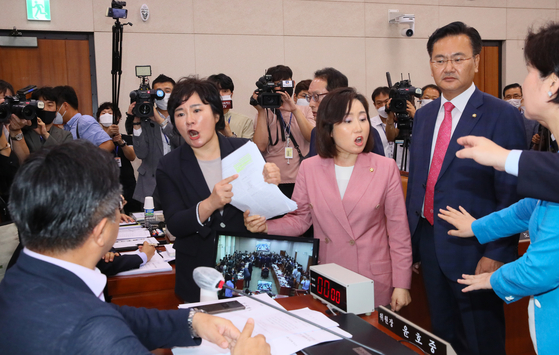 United Future Party lawmakers complain to Chairman Yun Ho-jung of the Legislation and Judiciary Committee about his attempt to hold a vote on controversial tenant protection bills without deliberation. [YONHAP]


The ruling party on Wednesday used its majority in the Legislation and Judiciary Committee to clear controversial bills to protect tenants by restricting landlords’ rights.

The National Assembly’s Legislation and Judiciary Committee, the final gatekeeper of bills before they are voted on, held a meeting in the morning and approved a series of revisions to the Housing Lease Protection Act.

After Chairman Yun Ho-jung of the committee, a DP lawmaker, introduced the bills for voting, UFP Rep. Kim Do-eup complained about the chairman’s refusal to allow a discussion.

Soon after, UFP lawmakers on the committee left the conference room. “This is a dictatorship,” one UFP lawmaker said.

Yun said the bills must be passed quickly because they are intended to protect the tenants from skyrocketing rents amid the continuing pandemic. “We need to stabilize the market as soon as possible by passing the bills at the plenary session on Thursday, five days earlier than the scheduled voting on Aug. 4,” he said.

According to the bills, tenants will be guaranteed renewal of rent contracts for two years after their existing two-year leases end.

Landlords will only be able to refuse an extension if they are moving into the units themselves. If they violate the terms and sign contracts with new tenants, old tenants have a right to seek damages from landlords.

A 5-percent cap on rent increases and a mandatory reporting of rental rates to the government were also proposed.

The new rules will be applied retroactively.

The rent control bills are likely to be passed in the plenary session, as the ruling party controls a super-majority in the legislature. Earlier in the morning, DP Chairman Lee Hae-chan stressed the importance of swift passage.

“Speed is more important than having a deliberation,” Lee said during the party’s leadership meeting in the morning. “Under the current market situation, a speedy passage is crucial.”

Before coming to the Legislation and Judiciary Committee Wednesday morning, the bills were approved by the Land, Infrastructure and Transportation Committee on Tuesday. It took just 60 minutes for the Land Committee to pass the bills. UFP lawmakers walked out after the bills were introduced.

“The ruling party seems to be mistakenly believe that the people want them to skip any deliberation to make high-handed decisions with its majority,” said Ka Sang-joon, a Dankook University political science professor.

“Once the bills are passed, it’s incredibly hard to change them again,” said Sohn Byoung-kwon, a political science professor at Chung-Ang University. “In-depth discussions should have taken place to think about possible side effects of the measures. I don’t know what they are going to do if the measures backfire, since no public debate took place to listen to the people’s opinions.”

After the DP used its majority repeatedly to push forward controversial bills, the UFP started discussing a plan to alert the public to its predicament.

As a result of the April general elections, the DP controls 176 seats in the 300-member National Assembly, enough to hold a voting session alone and pass almost any bill. The UFP has 103 lawmakers, barely enough to stop a constitutional amendment.

The UFP lawmakers held a meeting Wednesday afternoon and discussed a strategy to hold demonstrations outside the legislature.

“When a legislature fails to perform its function, opposition parties will naturally go outside the Assembly,” the UFP’s acting leader, Kim Chong-in, said. “There is no other way for us to fight if the ruling party abuses its majority and does not respect a proper process to deliberate a bill.”