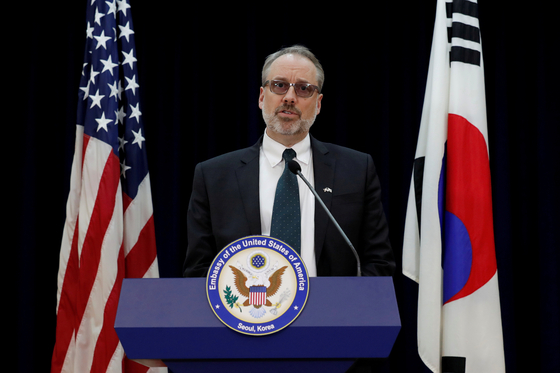 James DeHart, newly appointed as the U.S. State Department’s senior adviser for Arctic affairs, speaks at the U.S. Embassy after walking out of Special Measures Agreement (SMA) talks in Seoul on Nov. 19, 2019. [REUTERS/YONHAP]


James DeHart, the chief negotiator for defense cost-sharing with Korea, has been tapped by the United States as the new coordinator for the Arctic region, despite the absence of a deal between the two sides.

A career diplomat of 28 years, DeHart has served as the senior adviser for security negotiations and agreements and led the U.S. team in seven rounds of talks to reach a new Special Measures Agreement (SMA) with Korea since last September. However, the two sides have struggled to reach an agreement on Seoul’s contribution toward the upkeep of some 28,500 U.S. troops stationed in Korea despite their previous one-year deal expiring on Dec. 31.

The U.S. State Department in a press release Wednesday said that as the U.S. coordinator for the Arctic region, DeHart will oversee “policy-making and diplomatic engagement on Arctic-related issues to advance U.S. interests in the region related to safety and security, sustainable economic growth and cooperation among Arctic States to support and strengthen the rules-based order in the region.”

In this role, which has been left vacant for three years, DeHart will serve as the principle adviser to U.S. Secretary of State Mike Pompeo on all matters related to the Arctic region. The Trump administration has sought a greater influence in the area to counter advances by China and Russia.

DeHart previously served as deputy chief of mission in Oslo, Norway, and the State Department said that a “hallmark of his career has been close collaboration with U.S. allies and partners to advance our shared interests and values.”

However, Washington has yet to name DeHart’s replacement, leaving it unclear who will serve as the new U.S. chief negotiator for the SMA talks with Seoul.

Along with that vacancy, Seoul has been closely watching President Donald Trump’s decision Wednesday to withdraw some 12,000 U.S. troops, or about a third of its forces, from Germany.

Analysts are especially concerned that Trump may pull a similar move on Korea, or even use the reduction of U.S. troops as a negotiating tool amid a deadlock in the burden-sharing talks — especially ahead of the American presidential elections in November.

“We're reducing the force because they're not paying their bill,” Trump told reporters in Washington Wednesday, accusing Germany of failing to meet NATO defense spending targets. "Germany's delinquent; they haven't paid their fees [...] We don’t want to be the suckers anymore.”

He further signaled that other NATO countries could also see U.S. troops leave if they do not increase defense spending.

The Trump administration initially demanded $5 billion annually, a nearly fivefold increase in Korea’s contribution, though this amount has since been lowered. In one round of talks in Seoul last November, DeHart walked away from the negotiation table just 80 minutes into a second day of meetings, saying that the Korean team was “not responsive” to U.S. requests.

DeHart and his Korean counterpart in March reached a tentative agreement which had also been approved by the two countries’ foreign and defense chiefs, but Trump ultimately shot down the deal, demanding that Seoul pay more.

Jeong Eun-bo, Korea’s top negotiator for the 11th SMA, held talks with DeHart in Los Angeles from March 17 to 19. At the end of March he said that the two sides were at the final stages of an agreement.

But Seoul’s offer was ultimately shot down by Trump, who on April 20 said that he had “rejected” Korea’s offer and pressed the U.S. ally “to pay for a big percentage of what we’re doing.”

The lack of a new deal led to an unprecedented furlough of some 4,000 Korean personnel working for the U.S. Forces Korea (USFK), or about half of the total Korean workforce, in the beginning of April. The furlough ended in June as a result of a separate deal reached by Seoul and Washington to ensure the workers’ payment by the Korean government.

A Korea Foreign Ministry official confirmed Thursday that the Korean negotiating team remains the same for the SMA talks.

However, diplomatic sources said DeHart’s reassignment indicates that the SMA talks are no longer in the hands of working-level negotiators. Seoul, likewise, is not likely to make a first move because Washington unilaterally rejected its best offer.

The two sides have not been able to meet face-to-face for SMA talks since March amid the coronavirus pandemic.

“We will continue to negotiate to reach an agreement that is mutually acceptable. Both sides share an understanding to reach a deal as soon as possible," said Kim In-chul, spokesman of Seoul’s Foreign Ministry, when asked if Washington’s decision to reduce troops in Germany could have an impact on the SMA talks. “The defense cost-sharing negotiations and the reduction of the size of the USFK are unrelated issues.”

On the change in the U.S. SMA negotiator, he added, “I believe negotiations will continue without any setbacks.”

U.S. Defense Secretary Mark Esper on July 21 said had “issued no orders to withdraw forces” from Korea but left the possibility open, saying the Pentagon will look at adjustments for “optimizing our forces.”

But he also floated a desire to pursue rotational force deployments, which may eventually replace the permanent deployment of troops in allied countries.