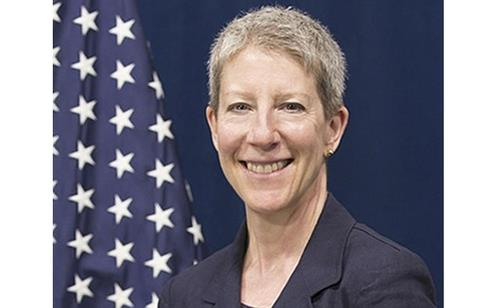 Donna Welton, a former assistant chief of mission at the U.S. Embassy in Afghanistan, was named by the U.S. State Department as the new senior adviser for security negotiations and agreements. [U.S. STATE DEPARTMENT]


The U.S. State Department on Monday named Donna Welton as its new chief negotiator to the deadlocked defense cost-sharing talks with Seoul.

Welton, a seasoned diplomat and former assistant chief of mission at the U.S. Embassy in Afghanistan, will replace James DeHart as the new senior adviser for security negotiations and agreements in the State Department’s Bureau of Political-Military Affairs. She will spearhead U.S. efforts to seal a new Special Measures Agreement (SMA) with Korea and similar cost-sharing negotiations set to kick off with Japan before their bilateral deal expires next year.

The U.S. State Department last Wednesday appointed DeHart as the new coordinator for the Arctic region.

DeHart has helmed the U.S. team for the defense cost-sharing negotiations on Seoul’s contribution toward the cost of stationing some 28,500 American troops in Korea since last September. The two sides have held six rounds of talks for the 11th SMA. The previous one-year deal expired at the end of last year.

The SMA talks between Seoul and Washington have been stalled in recent months after a tentative agreement reached in late March was rejected by U.S. President Donald Trump, who has urged Korea to pay more.

The Trump administration initially requested a fivefold increase, but Washington’s offer is now reportedly closer to a 50 percent increase over last year — around $1.3 billion. Seoul has maintained that a 13 percent increase from the previous year is its best offer.

Welton will also be overseeing defense cost-sharing negotiations with Japan as their current five-year agreement is set to expire at the end of March 2021. As it has for allies including Seoul, Washington is expected to pressure Tokyo to increase its contributions toward some 50,000 U.S. troops stationed in Japan.

“This would be the same even if that spot were vacant, but the Korea-U.S. defense cost-sharing negotiations will continue on without setbacks," Korean Foreign Ministry spokesman Kim In-chul said.

However, he said that no talks between the two countries’ SMA negotiators, either in person or through videoconference, have been arranged.

Finance expert Jeong Eun-bo, Seoul’s chief negotiator for the 11th SMA, last held talks with DeHart in Los Angeles from March 17 to 19 amid the coronavirus pandemic. It's unclear when an initial meeting between Jeong and Welton will be held.

“It is difficult to predict because travel of the U.S. negotiator is limited at the moment," a Korean Foreign Ministry official said Tuesday, noting the ongoing pandemic.

Despite a reassignment of the U.S. SMA negotiator and the rejection of a tentative agreement, the official said that negotiations will not start back at square one.

“If we are at a certain point in the negotiation process, just because there is a new negotiator, that doesn’t mean we will start back at the beginning. We will continue where we left off," the official said.

Welton, an art expert, has served as a diplomat for over 25 years and started her career in the U.S. Information Agency in 1984. She has been posted in Kabul since August 2019 and previously served as deputy chief of mission at the U.S. Embassy in Finland.

She also served in various posts in Japan over her career, most recently as a minister-counselor for political affairs from 2013 to 2015. She has also served in South Korea and Indonesia and as a deputy communications director at the U.S. Mission to the United Nations.

Welton is fluent in Japanese and has studied Korean among other languages, according to her State Department profile.

Welton received a doctorate in Princeton’s Asian Art and Archaeology Department and a master’s degree in strategic studies at the Army War College. She previously worked as a curator of Japanese art at the Metropolitan Museum of Art and as an exhibitions curator at the American Federation of Arts in New York.