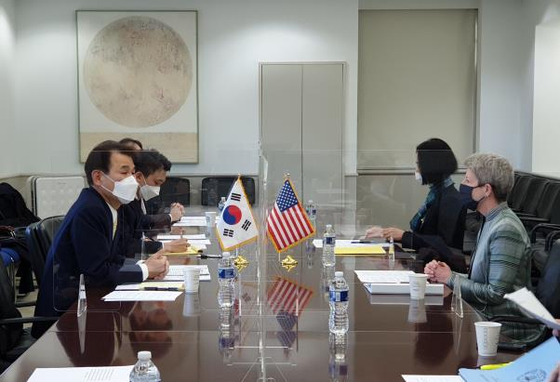 Jeong Eun-bo, left, Korea’s chief negotiator for the 11th Special Measure Agreement, holds talks with his U.S. counterpart, Donna Welton, in Washington Sunday. Seoul and Washington reached a tentative agreement on defense cost-sharing after a year and a half of negotiations. [FOREIGN MINISTRY]


Korea and the United States reached agreement on defense cost-sharing Sunday after 18 months of wrangling and threats by the Donald Trump administration to charge Seoul up to $5 billion per year.

Seoul's Ministry of Foreign Affairs said in a statement Monday that the two sides reached an “agreement in principle” in their first in-person meeting in nearly a year. But details of the new multi-year deal were not disclosed.

Jeong Eun-bo, Korea's chief negotiator for the 11th Special Measure Agreement (SMA), and his U.S. counterpart Donna Welton, held their first face-to-face talks on renewing a bilateral defense cost-sharing deal from Friday to Sunday in Washington. The previous deal, the 10th SMA, expired at the end of 2019.

The Foreign Ministry said, “Through the early signing of the agreement, the government will resolve the gap in the deal that has lasted for more than a year and contribute to strengthening the Republic of Korea-U.S. alliance and the combined defense posture, which is the linchpin of peace and prosperity on the Korean Peninsula and in Northeast Asia.”

Jeong, who has helmed SMA negotiations since 2019, was supposed to return to Seoul Sunday but extended his visit to Washington by one day. He held a videoconference last month with Welton, the new senior adviser for the State Department’s Bureau of Political-Military Affairs Office of Security Negotiations and Agreements under the Joe Biden administration, which kicked off in January.

The U.S. State Department confirmed that the two sides agreed to a "meaningful increase" in Seoul’s contribution toward the stationing of some 28,500 American troops in Korea.

“We are pleased that U.S. and Republic of Korea negotiators have reached consensus on a proposed text of a Special Measures Agreement that will strengthen our Alliance and our shared defense,” said the State Department spokesperson in a statement.

Seoul and Washington are “pursuing the final steps needed to conclude the agreement for signature and entry into force,” according to the spokesperson, who noted that the new accord “reaffirms that the U.S.-Republic of Korea Alliance is the linchpin of peace, security, and prosperity for Northeast Asia and a free and open Indo-Pacific region.”

The two sides were reported to have been eying a multi-year agreement with a 13 percent increase in Seoul’s contributions. The new accord is expected to last through 2025.

Since 1991, the two countries have conducted regular SMA negotiations under the Status of Forces Agreement (SOFA) to decide what Korea’s financial contribution to the non-personnel costs associated with stationing U.S. troops in the country should be.

After negotiations for the 11th SMA kicked off in September 2019, Seoul balked at the Trump administration’s initial demand for a fivefold hike in contributions.

A tentative agreement reached by the two negotiating teams in Los Angeles last March last year was rejected by Trump, who demanded Korea pay more. This resulted in a two-month furlough of 4,000 employees, or around half the Korean personnel working for the U.S. Forces Korea, from last April to June.

The Wall Street Journal reported Sunday that under pressure from the Trump administration, Korea offered the United States an initial 13 percent increase in burden sharing, with further increases over the following four years, determined by the size of Seoul’s military budget. During the fifth year, Korea would pay about $1.3 billion.

In the previous one-year agreement signed in February 2019 which expired at the end of that year, Seoul agreed to pay 1.04 trillion won ($918.5 million), 8.2 percent more than what it spent the previous year, or around half of the burden.

The latest agreement is expected to be signed after each country’s internal review.

U.S. Secretary of State Antony Blinken and Defense Secretary Lloyd Austin are expected to visit Seoul on their first Asia trip later this month. Blinken and Austin will reportedly visit Seoul on March 17 and 18 after a three-day trip to Japan and are expected to meet with Korean counterparts Foreign Minister Chung Eui-yong and Defense Minister Suh Wook, which could serve as an occasion to sign the new accord.

The deal will have to be ratified by the National Assembly before it takes effect. 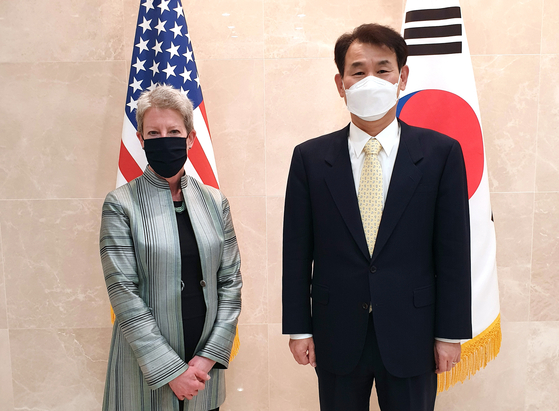