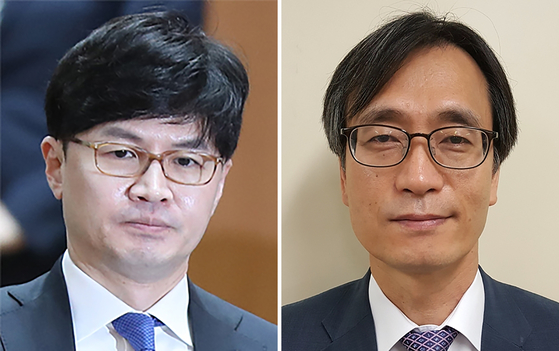 A brawl breaks out on Wednesday between Han Dong-hoon, left, and Jeong Jin-ung as Jeong tried to confiscate Han's mobile phone as a part of an investigation into the suspicion that Han had colluded with a reporter to blackmail a possible witness. [YONHAP]


A scuffle broke out Wednesday between Han Dong-hoon, a senior prosecutor accused of colluding with a reporter to frame a media personality close to the administration, and Jeong Jin-ung, the lead prosecutor investigating the case.

Han said Wednesday that Jeong, head of the Criminal Department of the Seoul Central District Prosecutors’ Office, assaulted him while exercising a search and seizure warrant against him.

Jeong’s team has been investigating Han for allegedly conspiring with a former Channel A reporter to blackmail a convicted businessman to obtain dirt on Rhyu Si-min, a close ally of the Moon Jae-in government.

The scuffle took place as Justice Minister Choo Mi-ae and Prosecutor General Yoon Seok-youl battle over how to proceed with the case. Han is a close associate of Yoon, and Jeong is from a district office handpicked by Choo to conduct the probe.

According to sources from the Seoul Central District Prosecutors’ Office and Han’s aides, Jeong’s team arrived at Han’s office in the Institute of Justice in Yongin, Gyeonggi, around 10:30 a.m. Wednesday to seize the Universal Subscriber Identity Module (USIM), also known as a SIM card, of Han’s mobile phone.

After reading the warrant, Han told Jeong he wanted a lawyer to be present during the raid, and Jeong granted permission, the sources said. Han tried to use his cell phone to call his lawyer.

According to Han, Jeong body-slammed him as he tried to enter the password to unlock the phone to make the call. Han said he was knocked down on the floor as Jeong grabbed his arm and shoulder.

“Jeong screamed that I should unlock the phone by using a face ID, not password,” Han said.

Jeong said he was trying to stop Han from deleting data on his phone.

Han said the warrant was to seize the USIM of the phone, not the phone itself. He also said he was entering the password in front of many people, dismissing Jeong’s argument that he was attempting to destroy evidence.

Han and Jeong both said they fell on the floor during the brawl. Han was holding onto the phone, and Jeong managed to secure it after the scuffle, sources said.

Jeong said he never body-slammed Han or grabbed his arm and shoulder. “My action was just a process to effectively secure evidence,” he said.

Although prosecutors are supposed to make video recordings of raids, the Seoul Central District Prosecutors’ Office said there was no record of the brawl because it took place before the raid formally began. Both Jeong’s team and Han’s aide recorded what happened after the scuffle.

After the scuffle ended, Han said Jeong must not participate in the raid because he used illegal force. Jeong refused, and only left the room around 1:30 p.m. after Han’s lawyer arrived.

Jeong later said he received treatment for muscle pain and high blood pressure. He released a photo of himself lying in an emergency room. 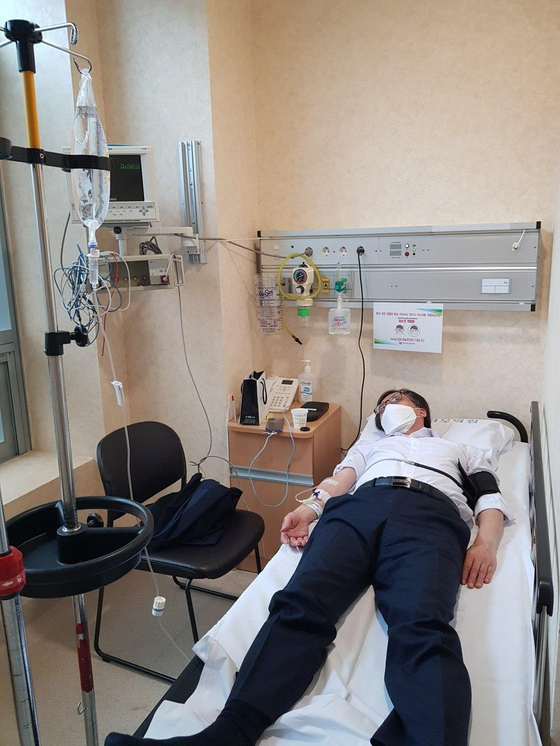 The Seoul Central District Prosecutors' Office released a photo Wednesday that Jeong Jin-ung, a senior prosecutor of the office, lying on a bed of an emergency room. [YONHAP]


“Jeong is the offender, and Han was the victim of the brutality,” an associate of Han told the JoongAng Ilbo. “Han will soon receive a medical checkup.”

Han complained to the Seoul High Prosecutors’ Office about the incident.

Jeong said he will file a defamation suit against Han. He also released a photo of himself lying in an emergency room to insist he too was hurt in the brawl.

The raid took place amid growing skepticism about the validity of the probe into Han. Last week, an internal review panel under the Supreme Prosecutors’ Office recommended that district prosecutors shut down the probe. The advisory panel also said Han should not be indicted in association with the attempted extortion charge leveled against the former Channel A reporter.