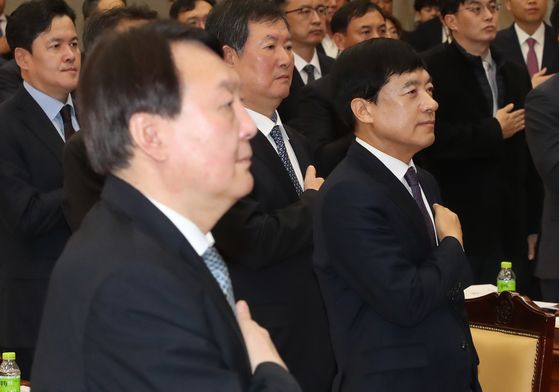 The district prosecutors' office said Tuesday that it wanted the Supreme Prosecutors’ Office to scrap its plan to operate an advisory panel to examine the validity of its probe. Seoul district prosecutors are investigating allegations that Lee Dong-jae, a reporter from Channel A, had conspired with Han Dong-hoon, a senior prosecutor and a close ally of Prosecutor General Yoon Seok-youl, to blackmail a businessman for incriminating information on Rhyu Si-min, a liberal pundit with close ties to the Moon Jae-in administration.

Han, who previously served as the head of the Supreme Prosecutors' Office's anti-corruption department, is also undergoing a separate internal investigation by the Justice Ministry. Han has consistently denied his involvement.

The prosecutor general has the power to form an advisory panel to review the validity of an investigation. The panel is composed of only legal experts including prosecutors, judges, lawyers and criminal law professors. It is different from the Investigation Review Committee of outside experts that recently reviewed the validity of a probe into Samsung leader Lee Jae-yong and concluded that the prosecution should not indict Lee.

The Seoul prosecution also relayed to the Supreme Prosecutors’ Office that it wants more independence — equivalent to that of a special prosecutor, because Han, a high-ranking prosecutor, is a suspect of the investigation.

The system was introduced in 2010 and has been used four times. The last case was in 2016, when a special prosecutor probed and indicted senior prosecutor Jin Kyung-joon on charges of receiving massive bribes from Nexon co-founder Kim Jung-ju.

The Supreme Prosecutors’ Office said it will convene an advisory panel on Friday as scheduled.

The Supreme Prosecutors’ Office also rejected the demand that the team is guaranteed independence equal to a special prosecutor. It said all investigations come with the possibility of human rights violations, and that it is necessary for a higher office to command and control district prosecutors’ probes.

Speculation has grown that the Seoul Central District Prosecutors’ Office, headed by Lee Sung-yoon, was defying Prosecutor General Yoon. Lee was named the chief of the district office by Justice Minister Choo Mi-ae in January.

Lee, who formerly led the prosecution bureau of the Ministry of Justice, is known as Choo’s ally. Ever since he came on board, Lee vowed to reform the prosecution.