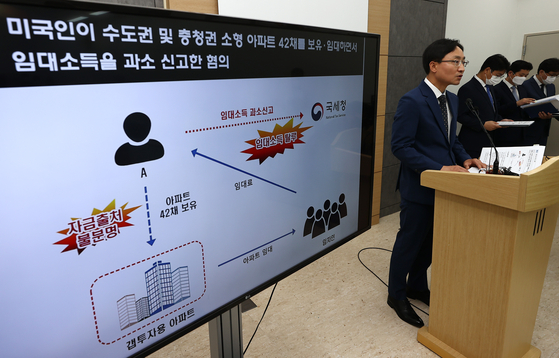 Lim Kwang-hyun, head of the National Tax Service's investigation bureau, describes some of the alleged tax dodging by foreign landlords at the government complex in Sejong on Monday. [YONHAP]


Foreign owners of domestic property are on the radar of the National Tax Service (NTS), which is looking for those who have underreported rental income.

This comes as the government seeks to discourage property speculation by taxing properties in overheated areas at higher rates and charging a higher acquisition tax for those owning one or more apartments.

According to the NTS on Monday, foreigners have recently been active in the market, especially in Seoul and neighboring areas. including Gyeonggi and Incheon. It said they have been contributing to the housing market bubble.

The NTS noted that this year the number of apartments purchased by foreigners has increased sharply.

Among the foreigners, Chinese investors bought the greatest number of apartments since 2017. They purchased 13,573 units, 58 percent of all apartments bought by foreigners. Americans trailed behind at 4,282 units, followed by Canadians, Taiwanese, Australians and Japanese.

Koreans with foreign citizenship were 4.2 percent of the total, or 985 people.

Apartment purchases by foreigners were heavily concentrated in the greater Seoul area.

By value, Seoul was No. 1, with 3.27 trillion won worth of apartments sold to foreigners. Gyeonggi trailed behind at 2.75 trillion won, while Incheon came in at 625.4 billion won.

In Seoul, the purchases were heavily concentrated in the popular three greater Gangnam districts — Gangnam, Seocho and Songpa. Apartments bought in these three districts by foreigners were one quarter of the Seoul acquisitions, with Gangnam District at 517 units, Seocho District at 391 units and Songpa District at 244.

According to the NTS, 1,036 foreigners purchased two or more apartments since 2017, which is 4.5 percent of all foreigners making purchases since 2017.

Among the foreigners buying multiple apartments, 866 had two, 105 had three and 65 had four. These foreigners owned a total of 2,467 units.

Of the foreigners making purchases, 32.7 percent never lived in the apartments after making the purchase.

“We suspect speculative forces, with foreigners buying but never living in the units,” said Lim Kwang-hyun, head of the NTS investigation bureau. “We are currently looking into 42 foreigners that own multiple apartments for possible tax dodging, including housing rent income.”

The foreigner has been renting three of the apartments to other foreigners at a high monthly rent, but the foreign landlord failed to report the income made from renting out the apartment.

Another is a Chinese national in their 30s who after finishing language school in Korea settled in the country. The person owns eight apartments in Seoul, Gyeonggi, Incheon and Busan. Of the apartments, seven are rented out. However, the income has never been reported.

The government said it has requested data on the Chinese landlord from the Chinese tax authorities to determine the origins of the funds.

The NTS also said if it finds the foreigners have dodged tax payments, they will report them to their home country tax authorities using information exchange agreements.

In 2019, the NTS conducted a joint tax investigation with the tax agency of another country and collected 1.5 billion won of unpaid capital gain taxes from foreigners on 3.9 billion won of sales.

On July 30, the ruling party has proposed a reform bill that would impose a 20 percent acquisition tax on foreigners who purchase apartment but fail to live in the units for six months.

Currently, those owning as many as three apartments pay a 1 to 3 percent tax on apartment purchases. Those owning four or more units are hit with a 4 percent acquisition tax.

On July 10, the government announced an increase in the acquisition tax.