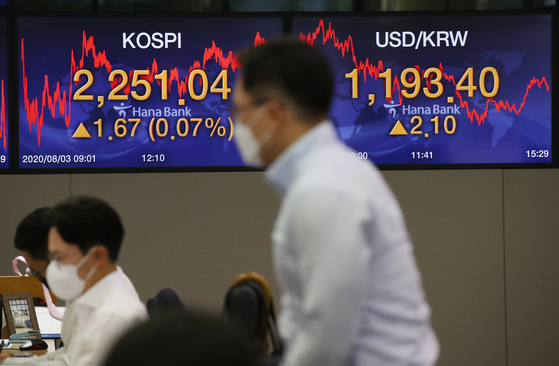 A screen shows the closing figures for the Kospi at a trading room at Hana Bank in Jung District, central Seoul, on Monday. [NEWS1]


Stocks closed slightly higher Monday due to an advance in electronic vehicle (EV) battery makers and tech shares, bucking concerns over the global resurgence of the Covid-19 infections. The won fell against the dollar.

The local stock market stayed in negative terrain amid the resurgence of Covid-19 infections around the world. Global cases have topped 18 million.

The political feud between the United States and China, Korea's two largest trade partners, also pushed the index into a tight range.

The local currency closed at 1,193.40 won against the dollar, down 2.1 won from the previous session's close.