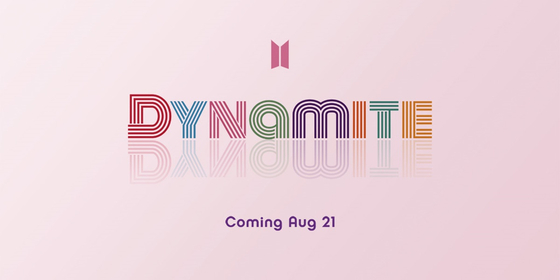 
The title of boy band BTS's upcoming single will be "Dynamite," its agency Big Hit Entertainment announced on Monday.

The agency released the logo for the single on Sunday at midnight, featuring a pink background with each letter of "Dynamite" in different color.

This is the first information the agency has released about the new single, set to drop on Aug. 21. The band first announced that a single was forthcoming during a live-streaming session on July 27, as a gift to fans struggling with the difficulties imposed by the coronavirus pandemic.

BTS released its fourth full-length album, "Map of the Soul: 7" in February this year, storming music charts in and outside of Korea with the lead track "On." The band also broke the Guinness World Record for the most streamed online music concert with "Bang Bang Con," which recorded 756,600 viewers on June 14.