The arrival of new shortstop Addison Russell has breathed new life into the Kiwoom Heroes, with the Seoul club on a six-game winning streak and rising quickly as the KBO reaches the halfway point.

Looking at the KBO's regular season standing this year, the Heroes are now only four games behind the top-ranked NC Dinos. Thanks to the winning streak, the Heroes once again switched spots with the Doosan Bears and are now ranked second in the table.

Although they still hold a four-game lead, it's uncertain as to whether the Dinos will be able to keep up that momentum until the end of the season — cracks are already starting to show as they lost two out of three games against the Bears over the weekend. 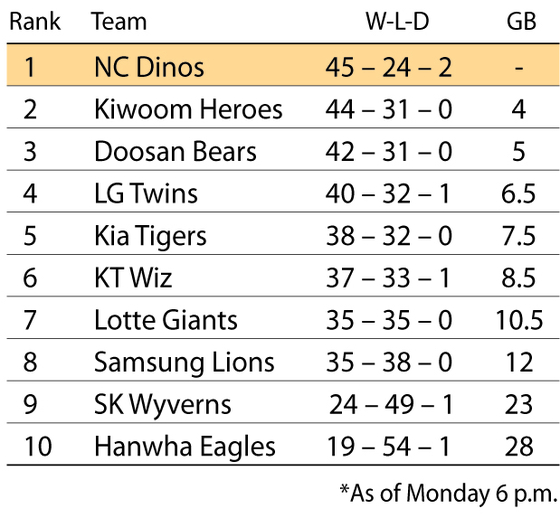 The addition of Russell has definitely given the Heroes a boost. Since he made his KBO debut on July 28 against the Bears, Russell has played in five games.

Throughout those five games, Russell has a 0.455 batting average with one home run and six RBIs. Even before Russell made his debut, his addition to the Heroes lineup made headlines as he was a former major league All Star shortstop. Having gone through two weeks of quarantine, when Russell finally made his debut he proved his worth by adding a run, two RBIs and two hits in his first game.

In addition to Russell, outfielder Lee Jung-hoo and infielder Kim Ha-seong also excelled throughout the week. Looking at the two young Heroes' recent performances, Kim and Lee are tied for third in weekly batting average, at 0.524. Kim certainly had a great week as he also ranks second in weekly home runs, at two, and first in runs, at 10, while Lee was ranked second in weekly RBIs, at 10.

The Seoul club started strong, picking up a 10-3 victory against the Lions. If that wasn't impressive enough, the Heroes scored 22 runs on Saturday to beat the Lions 22-7. They finished the weekend with a 4-2 win on Sunday.

The KT Wiz also had a great week, winning their series against the SK Wyverns over the weekend. However, as their game on Sunday was canceled due to heavy rain, the two teams were set to play a make-up game on Monday, until that was also canceled due to rain. The Wiz are now ranked sixth in the regular season standing, only one game behind the fifth-ranked Kia Tigers.

The Tigers had a rough week, falling down two spots in the standing. They picked up two losses over the weekend to lose their series against the Lotte Giants. For the Giants, winning the series helped them climb out of the eighth spot in the standing, as they are now ranked seventh.

Looking at the results of other weekend games, the Bears picked up a winning series against the top-ranked Dinos, with a 12-10 victory on Saturday and another 7-4 on Sunday. Last but not least, the LG Twins faced the Hanwha Eagles, finishing their series with a 1-1 draw. As their Sunday game was canceled due to rain, the two teams were unable to make it up on Monday as downpours continued.

Down in Gwangju, the Tigers will play their three-game series against the Twins at home while the Heroes will face the Wiz at Gocheok Sky Dome in western Seoul. In Daejeon, the Eagles will host the Dinos.

All five games are scheduled to start at 6:30 p.m. With heavy rain forecast throughout the week, the Heroes and Wiz playing in the covered Sky Dome may well be the only teams that manage to play all three of their games.

Addison Russell announces arrival with two RBIs and a run