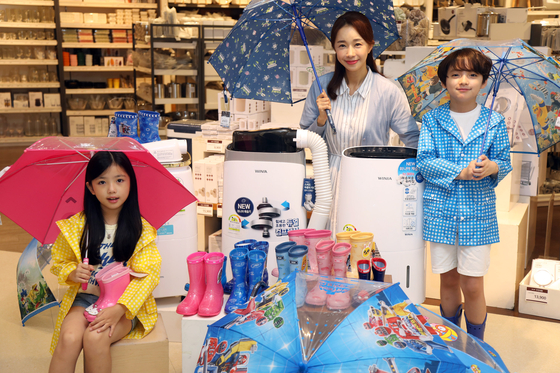 Models promote umbrellas, rain shoes and dehumidifiers, which are selling well during the monsoon season. [EMART]


As the rainy season this year goes on longer than usual, sales of wet weather products like dehumidifiers and car windshield wipers have shot up. Sales of air conditioners shrunk.


The monsoon season, which began on June 24, reached its 42nd day as of Tuesday, making it the fourth-longest rainy season since the Korea Meteorological Administration (KMA) started keeping records in their current form in 1973.

“While I was leaving work in my car, I almost got into an accident because I couldn’t see properly due to the heavy rain,” said an office worker. “The weather forecast said the rains were continuing, so I quickly bought new wipers.”

Dehumidifiers, which lost popularity in recent years, are popular again due to the prolonged monsoon season and the coronavirus crisis, which has forced people to spend more time at home. Since the mid-2000s, dehumidifier sales grew 20 to 30 percent annually, but then air conditioners started offering dehumidifier functions. Sales last year were 200,000 units, 84.6 percent lower than 1.3 million in 2013.

Shinil Electronics said sales of dehumidifiers in the first half of this year jumped four-fold compared to the same period last year. “Recently, air conditioners featuring dehumidifier functions have been released, but dehumidifiers play a better role in quickly lowering the humidity indoors,” said a spokesperson for the company.