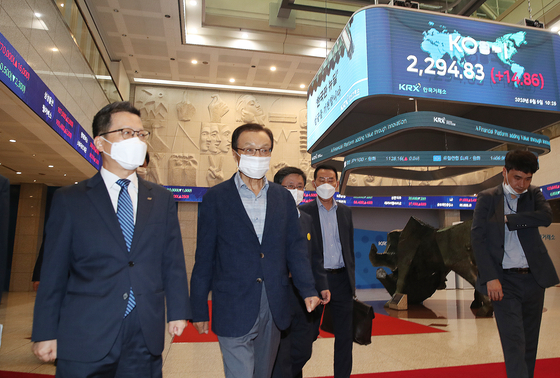 Democratic Party leader Lee Hae-chan walks toward the meeting room inside the Korea Exchange building to attend the event for the New Deal Fund. [YONHAP]


Psst. Wanna make some easy money, at no risk? If so, the government has a deal for you — a New Deal that is.

The 1 trillion won ($844 billion) New Deal Fund being pushed by the Democratic Party offers better returns than banks, guarantees the principal and comes with some tax benefits. The money will be used to attract the private sector to invest in state-led 5G, autonomous vehicle and green projects.

This was the first time the DP laid out the details of the fund, which Finance Minister Hong Nam-ki previously said would "generate a stable profit" to investors.

DP lawmaker Hong Sung-kuk, who currently leads a team of lawmakers pushing the fund, proposed a 3 percent annual yield and no tax on the first 300 million won of income. Any income that exceeds 300 million won will be taxed at 5 percent. The Korea Credit Guarantee Fund will guarantee the principal.

Finance Minister Hong Nam-ki offered his support, encouraging people to invest in the fund touting its security and tax benefits. Hong wrote on his social media page in July the fund will “help connect the increased liquidity in the market with productive investments.”

Despite it being categorized as a “fund,” it will be more akin to an installment savings product from the government, considering its high rates, security and guarantee.

This has been attempted in the past.

In 2013, the government brought back the Workers' Asset Building Savings program. This seven-year fund was exempt from tax and had a competitive yield ranging from 4 to 4.6 percent. It was more of a welfare scheme than an investment product as it was limited to people earning less than 50 million won a year.

In 2016, the government introduced the Individual Savings Account system (ISA), which allows for the management of the number of investment products at once. The accounts are tax exempt up to a certain limit.

While the New Deal Fund and the ISA are similar, the ISA is not guaranteed.


Critics are skeptical as to how the government can guarantee the investor’s principal. They’ve raised concerns that the government might be using taxpayer money to pay back investors.

“The idea of making a fund that also guarantees the principal already goes against the rule of the market,” said Lee young, professor at Hanyang University’s College of Economics & Finance.

“This means that the fund will be able to guarantee the principal even if the investment suffers losses. The DP needs to explain exactly how they are going to do that. We need to know if they have plans to use taxpayer money to cover losses.”

Normally, the government raises taxes or issues bonds when extra money is necessary. If the government uses tax money to pay back investors, critics argue it could be an “irrational distribution of income.”