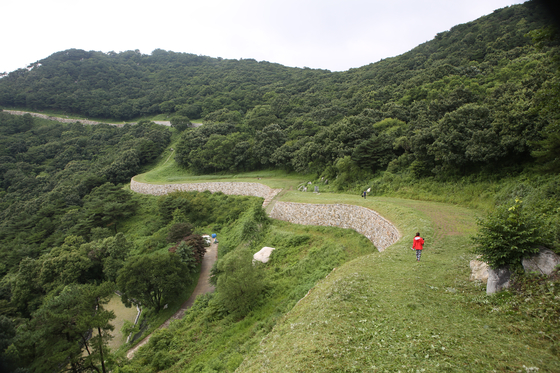 
YESAN COUNTY, South Chungcheong – The search for less-traveled spots continues for many who are seeking a place to relax at during their summer vacation where they can also feel safe from the threat of the coronavirus pandemic.

While the constant rain keeps many from venturing outside at the moment, why not start compiling a list of the places you want to visit when the rainy season finally subsides so you'll be ready to pack your bags and hit the road as soon as the sun appears.

Yesan is not a place well-known to avid travelers. The beaches of Busan or mountainous Gangwon’s Pyeongchang are much more popular. But, the tide is turning thanks to the new pandemic-era trend of discovering spots that aren’t too widely known and therefor safe to visit while also avoiding the crowds.

The county first began getting some attention last year after the opening of a suspension bridge over the Yedang Reservoir. The reservoir, with a perimeter of about 40 kilometers (24.9 miles), is home to Korea’s longest no-car, pedestrian-only suspension bridge that is 402 meters (1319 feet). It is known as Chulleong Bridge.


Another fun feature installed right next to the bridge is a fountain which spouts water in time with music, ranging from K-pop to some traditional Korean-style songs. The water shot out of the fountain goes as high as 110 meters up. It is said that it feels like the bridge tilts slightly when everyone on it stands on one side to get the best view of the fountain music show. You can also get a view of the fountain from a higher vantage point at the observatory which is accessible through the stairs in the middle of the bridge.

If you are too scared to take a stroll across the bridge you can still enjoy the view by talking a stroll around the trail, which has been fitted with wooden decking for convenience.

Fortress with a view
One of the reasons for building fortresses high up in the mountains was to be able to see far into the distance to check for any suspicious signs of an attack by enemy troops. Imjon Fortress is one such example of this type of fortress and is located on top of Mount Bongsu, which is about 484 meters high. It is accessible with a car.

From the top you can enjoy an aerial view of the Yedang Reservoir.


The fortress was used to guard the Baekje Kingdom (18 B.C. – 660 A.D.) and also later by those who were trying to rebuild the already collapsed Baekje. The inside is built up with soil while the outside is covered with stones.

The total perimeter of the fortress is over 2 kilometers, and it is all connected for those who want to take a long walk around the top of the mountain to see the entirety of Yesan from up above. Parts in the southwest have been recovered and are lined with a stone wall, while other parts have been left with only the remnants.

The walk itself isn’t too demanding. If you take your time, a stroll about one fourth of the trail and back takes a good one hour. There is also a pavilion where visitors can take a rest for some time as well as benches here and there along the trail by the fortress wall. 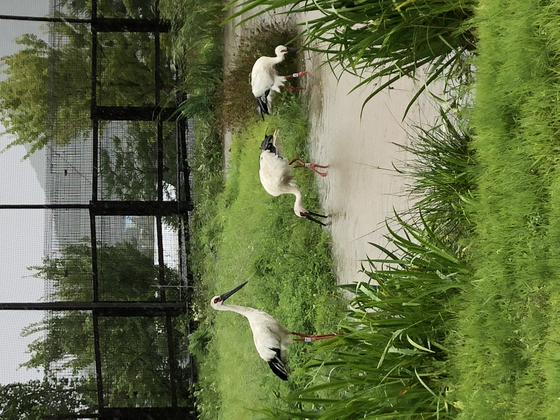 Korea used to have an abundance of Oriental storks, which were designated as the nation's Natural Treasure No. 199. The breed unfortunately became extinct after the male of the last pair in the country was shot by a poacher and the remaining female later died.

Authorities began a project to reintroduce the birds to Korea. Back in the 1970s, the species lost its main source of food when they ate insects that lived in rice paddies, and other fields died out due to the use of agricultural pesticides.

Korea imported some of the species from neighboring countries and succeeded in breeding them. Some of the birds kept at Yesan Oriental Stork Park were released into the wild and were confirmed to have returned to Korea after their annual migration. Currently over 180 birds are being nurtured at the park. 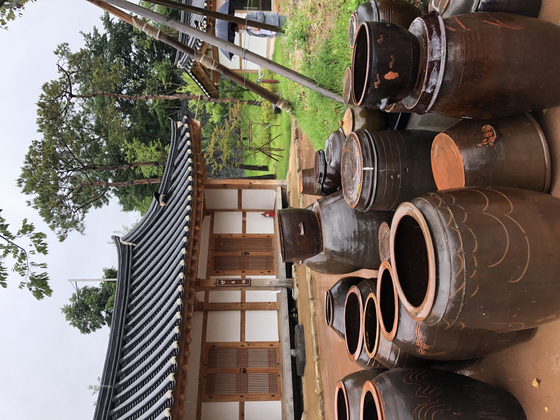 Yesan is one of the regions where merchants called bobusang actively worked. Bobusang usually carried packages on their back or in their hands and would sell a variety of everyday items as well as some more luxurious craftworks. Historically, they were the ones regularly hitting markets in different cities and regions to bring what’s available in one area to another and inform people about what they didn't have regular access to. These merchants traveled back and forth in Naepo, a term that refers to multiple areas around Yesan.

To inform visitors about the history of Yesan and its ties to these merchants, the county opened Naepo Bobusang Village late last month.

The attraction looks like a folk village, with each house offering different experiences a bobusang might have had. Jumak, a bar and restaurant where they get their hungry stomachs filled, greets visitors with food, and some other craftwork studios offer a chance to make some of the accessories current day bobusang —if they still existed— would have sold.

Given that these merchants visited towns accessible by boats to cross rivers easily, there is a sample boat floating in a large pond.

To entice youngsters, the village also features a small water park as well as some entertaining rides like slides and swings, so that young kids can enjoy themselves before and after they get educated about how the market worked.

Inside the village there is a museum where more written information with artifacts is available. The museum also has a variety of games so that youngsters can understand how trade works and how the prices for certain items were determined.

Another historical magnet that drives many people to visit is that Yesan is where Korea’s famous calligrapher Kim Jeong-hee (1786-1856), whose pen name is Chusa, grew up. The house he lived in when he was young is open to public.

Steps away from the house, there is a white pine tree, one of the rarest kinds in Korea. It is said Kim brought some of the seeds during his visit to China for further studies, and planted them right in front of the grave of his great grandfather. The trunk of the pine tree is white. The area isn’t just about one building Kim used to live in. It has a museum that explains his life, along with some copies and originals of his writing on paper, as well as multiple graves of Kim’s relatives.

Beat the heat in the gorgeous valleys of Goesan County

Back to the skies

Fall Travel Week gets the chop, safe travel promoted instead