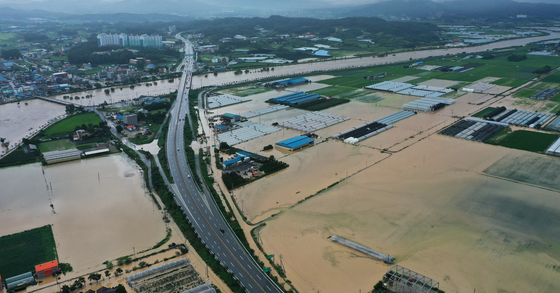 Farms in Anseong, Gyeonggi, submerged on Aug. 2. The heavy rainstorm has particularly hit hard on many farms. [YONHAP]


Recent flooding is raising concerns of a possible spike in food prices.

Vice Finance Minister Kim Yong-beom during a government policy meeting on Friday said several vegetable prices have gone up significantly compared to last year due to the heavy rain that has damaged farms and reduced the supply of agricultural produce.

“The government will come up with a plan according to the item to stabilize supply as there’s a possibility of agricultural goods supply worsening as [farms] could be affected by typhoons and heat waves after the rainy season,” Kim said.

For now, the government plans to swiftly provide support to areas that have been affected heavily by the downpour while releasing produce from the government stockpile. Additionally, the government will provide nutrients and pesticides to farms at a discount between 30 to 50 percent. 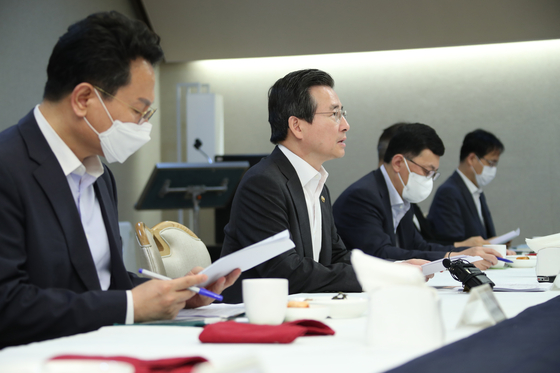 Vice Finance Minister Kim Yong-beom, second from left, attends a government meeting in which he expressed concerns on the rising food prices due to many farms being damaged by the heavy rain. [YONHAP]


Korea is facing one of the worst rainy seasons of the past decade.

However, the situation could get worse as the weather agency is projecting the rainy season will continue until Aug. 14.

The rain has damaged large areas of farmland.

As of Friday, according to the Agriculture Ministry, 7,581 hectares of farm land have been submerged in water. Additionally, 497 hectares have been covered by landslides or washed away.


By area, South Chungcheong suffered the most, with 2,655 hectares of farmland submerged, while Gyeonggi came in second with 2,571 hectares, North Chungcheong with 1,858 hectares and Gangwon with 444 hectares.

North Chungcheong ranked first when it came to farms that were washed away or covered by landslides, with 248 hectares, followed by South Chungcheong with 199 hectares and 49 hectares in Gangnwon.

Rice farms suffered the most, with 5,471 hectares lost, followed by vegetables at 964 hectares and other crops at 609 hectares. Fruit farms were also affected, with 125 hectares damaged.

Consumer prices, especially on fresh produce, were already on the rise.

Livestock and fishery prices were up as well, at 9.5 percent and 5.2 percent respectively.