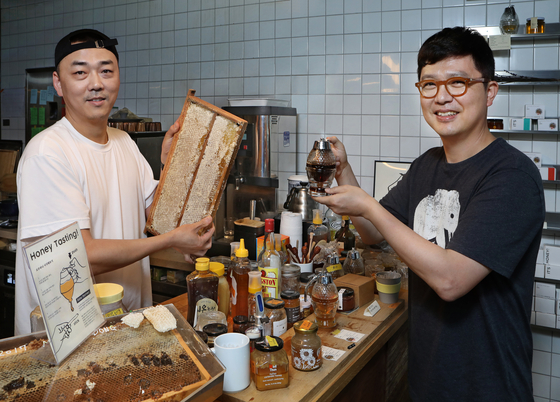 
To most people, honey is just honey. It is a sweet, sticky liquid that we sometimes drink with water or spread on a piece of toast.


To Lee Jae-hun and Ian Kwon, who call themselves honey sommeliers, honey is much more than that.

Lee was a barista before becoming a beekeeper. He became interested in honey after keeping two beehives on the roof of his house — he tried it out of curiosity after watching videos of people beekeeping online. Those early days helped him learn the difference between commercial honey and raw honey, which comes straight from the honeycomb and doesn’t go through artificial processing.

The interest led to the opening of It’s Honey, a beekeeping business and café that runs honey courses and supplies its products to other businesses in Korea.

Kwon, the CEO of It’s Honey, used to be an office worker. He first met Lee years ago when they were working at different music companies. They continued to keep in touch until one day they shared their interests in honey and decided to launch It’s Honey in May last year.

The two have the qualifications to back up their business.

Lee enrolled in the London Honey Expert — Sommelier Certification Course last year. The program’s goal is to enable participants to assess the quality and variety of honeys. Kwon took a similar course in the United States last year — the Sensory Evaluation of Honey Certificate Course from the Honey and Pollination Center at the University of California, Davis.

Below are edited excerpts of an interview with the pair. 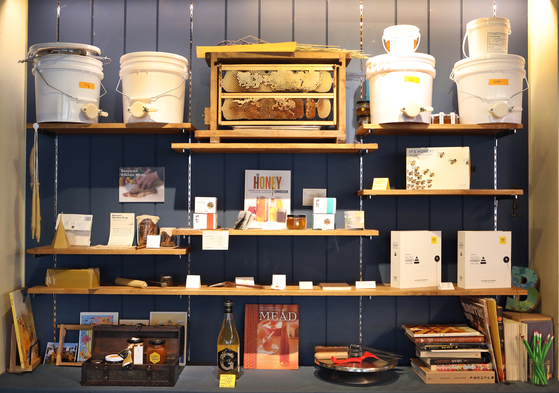 
Q. What are honey sommeliers and what’s their job?

Lee: The most well-known type of sommeliers are wine sommeliers. They refer to people who have knowledge on the quality and history of wines. They differentiate wines based on various categories, including scent and taste. Similar to wine, honey also has different histories and flavors. Recognizing that difference and curating honey is part of the role of a honey sommelier.

A decade ago, people were not aware of the concept of specialty coffee. Not many people were aware that some coffee has a sour taste. But gradually, they’ve come to learn and enjoy different types of coffee. After learning about honey, I’ve realized that honey is similar to coffee in that there can be different tastes of honey depending on how, where and what season it was produced. People are not aware of that because they haven’t experienced it.


Q. What kind of honey is commonly produced in Korea and what changes the taste of honey?

Kwon: Multi flower honey is commonly produced in Korea because there are various types of flowers growing here. Acacia and chestnut blossom honeys are also common since there are quite a lot of them in Korea.

Unlike in the United States, where there is a lot of land, it is not easy in Korea to produce a single-tasting honey. To do so, there needs to be a vast area of land that exclusively grows a specific type of flower like lavender fields in California, so bees only extract nectar from lavender. But considering the small area and seasonal factor in Korea, which reduces the period flowers can bloom, it’s not easy to produce monofloral honey. To produce a monofloral honey, some beekeepers in Korea have to start in the southern part of the country, where flowers start to bloom first, and gradually move north.

Lee: Because of the climate factors, the exact same honey produced this year can’t be produced at any other time.

Kwon: Raw honey refers to honey that has gone through a proper ripening process. It is usually a long process to make honey — worker bees collect nectar, pass it on to other bees at the hive, where it dries out.

Since the amount of time flowers bloom in Korea is short, most honey produced here hasn't really gone through that entire process. [Manufacturers remove] the honey from the bees before it has dried out and artificially continue the process, heating it to make it stickier because there needs to be less than 20 percent water in the liquid for it to be called honey. That level differs depending on the country.

Lee: There are a lot of recipes for honey. It can be used as sauce for salads, sweetener for yogurt or for baking cakes.


Kwon: Changing common views on honey by holding classes is important because to effectively spread the importance of raw honey, we need consumers who share our views. Once the demand is formed, more suppliers will start making raw honey. Currently, there isn’t much of that demand, which is the reason for the lack of supply.