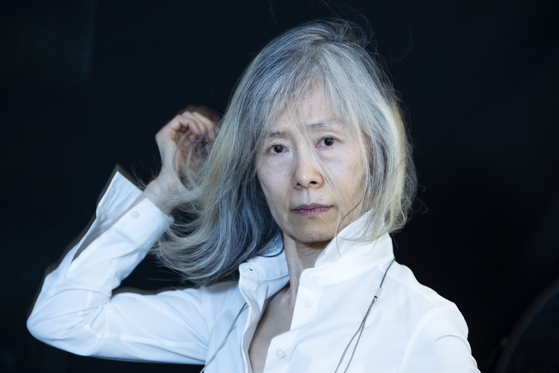 Actor Ye Su-jeong, 65, plays the lead role for the theatrical performance ’Hwajeonga: Song of Spring Blossoms.“ The performance is being staged to commemorate the 70th anniversary of the National Theater Company of Korea. [KWON HYUK-JAE]


“I’m so excited,” said 65-year-old actor Ye Su-jeong during a recent interview with the JoongAng Ilbo prior to the opening of the theatrical performance “Hwajeonga: Song of Spring Blossoms,” in which she plays Kim, the lead role.

“Hwajeonga” was set to be staged in February to commemorate the 70th anniversary of the National Theater Company of Korea (NTCK). But the show was called off two days before the scheduled opening date due to the rapid spread of the coronavirus.

Six months have passed since the abrupt cancellation of the performance and “Hwajeonga” was finally shown to the public on Aug. 6.

Ye, who showed up at a cafe in Sinsa-dong, southern Seoul, for an interview last month, said, “I was about to put on my stage costume on the day of the dress rehearsal and I was told that the show was canceled.”

When the tickets for the performance went on sale in July, the website of the NTCK froze because of heavy traffic from people desperate to grab tickets for the show. The first batch of tickets that became available sold out in an hour. Clearly, not only Ye is anticipating the show.

Written by Bae Sam-sik and directed by Lee Seong-yeol, “Hwajeonga” is the story of women who weather turbulent times in April 1950 in a small village of Andong, North Gyeongsang.

The protagonist Kim, played by Ye, turns 60, so Kim, her three daughters, two daughters-in-law and three grannies who are working maids for the family of Kim pack up to go on hwajeon nori, an excursion to enjoy the season. As part of the half-day picnic, women used to make hwajeon, or rice cake topped with edible flowers.

The women’s continuous chatter fills the stage and the theatrical performance sheds light on the small yet precious moments that sustain the life of the women.

Ye said, “The background of ‘Hwajeonga’ is exactly the same as the current situation.”

According to Ye, there is no difference between people who are feeling insecure due to the coronavirus pandemic and people who lived 70 years ago when the country was at war.

“This insecurity and anxiety can be avoided by no one. They overwhelm us just like a disaster. But this too shall pass. In ‘Hwajeonga,’ people are in love and they give birth to a child even when bombs are falling from the sky. How could people live that way amid a crisis? By looking at their story, I believe we can gain strength in this muddy reality.” 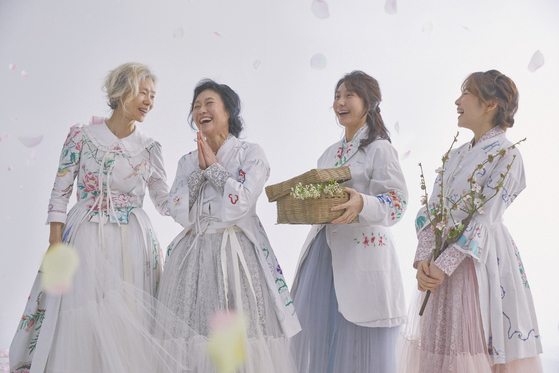 
“Hwajeonga” runs through Aug. 23 at Myeongdong Theater in central Seoul. Ye recalled her special memories with the venue. At just 5-years-old Ye would wait at the theater for her mom to finish her performances.

Ye’s mother, Jeong Ae-ran, was also an actor. Many people remember Jeong as the granny from the drama series “Country Diaries” (1980-2002). Ye’s mother was opposed to her daughter following in her footsteps, but Ye said she ended up pursuing the same career as her mother when she came across a quote by German playwright Bertolt Brecht. The writer considered a theater as a place that enlightens citizens. Ye majored in German language and literature in college.

“Enlightenment is something that makes you awake. Not only the audience but actors need to stay awake at theaters. Otherwise, you can’t take the stage.”

Ye began acting when she was in college. The first troupe she joined in belonged to the Goethe-Institut Korea. Years later in 1979, she debuted in the theatrical play titled “A Woman Named Solitude.”

She pursued acting over the past four decades but she remained relatively obscure for most of her career. It is only recently that Ye started to gain publicity among the public.

Ye stole the limelight when she played a senior passenger in the 2016 hit film “Train to Busan.” In the 2017 film “Along with the Gods: The Two Worlds,” she impressed moviegoers by playing the role of a mother who takes the side of her abusive son.

In the drama series “On the Way to the Airport” (2016), Ye depicted the role of an intangible property of Korea who has expertise in making traditional knots. She was also cast for the role of the head of a conglomerate in drama series “Search: WWW” (2019).

In the upcoming film “An Old Lady,” which is slated to open on Aug. 20, the actor plays the lead role of a 69-year-old woman who is sexually abused by a 20-something-year-old man. Nobody is paying attention to her voice, but she eventually files a lawsuit against the young man over the assault.

It seems like the actor has reached the peak of her career in her 60s.

“It’s all thanks to the time. In the past, old actresses used to play obvious roles like a grandmother, mother or mother-in-law. But we’re living in a society where a unique character is wholly accepted regardless of age and gender. Now more roles are given to old actresses, so I feel so lucky.”

Looking at Ye’s recent career, she seems open to any genre of story from theatrical performances to drama series to films.

“Theatrical plays enable you to exchange chemistry with the audience. With films, you can touch the hearts of many people while dramas are fun as they are friendlier [than other types of stories.]”

When asked of her criteria when choosing what to do for her next job: “We can’t really pick and choose because the nature of our job is being chosen.

“I love literary works. When I see works with social messages, my heart flutters. But I find works devised for sheer entertainment difficult. When I don’t agree with the message the work conveys, I don’t do it.”

To wrap up the interview, Ye shared her philosophy on becoming a good actor. It is finding “small pleasures in life.”

“Whenever I see some evils that exist in this world, it bothers me. I don’t have the energy to confront evil, but I can get away from it. So I try to find small pleasures and beautiful things in life such as listening to music and enjoying paintings.”