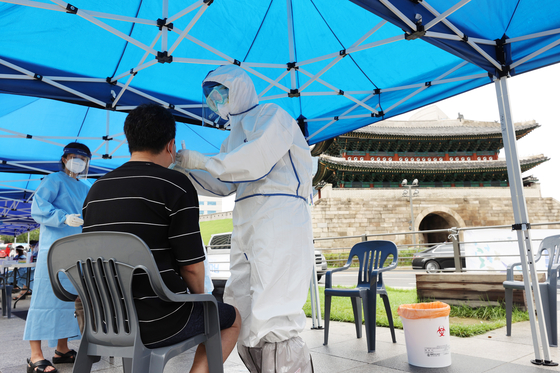 Health officials examine a man at a makeshift Covid-19 testing site at Namdaemun Market in Jung District, central Seoul, on Monday. Anyone who visited the market’s Kennedy Complex from July 30 to Aug. 8 has been strongly recommended to be tested. [YONHAP]

All eight people were from the market's Kennedy Complex building near Hoehyeon Station on subway line No. 4. Authorities strongly recommended anyone who visited the building from July 30 to last Saturday to be tested.

The cluster was first detected last Thursday, when a merchant from the building was diagnosed with the coronavirus after coming into contact with an infected patient at her church in Goyang, Gyeonggi.

At least 31 Covid-19 patients had been traced to the Goyang church by Monday noon, including the eight cases at the Kennedy Complex, which mostly specializes in women's apparel.

Health authorities ran a virus test on all 20 people who work inside the same building as the churchgoer, and seven turned out positive Sunday. The rest were negative. 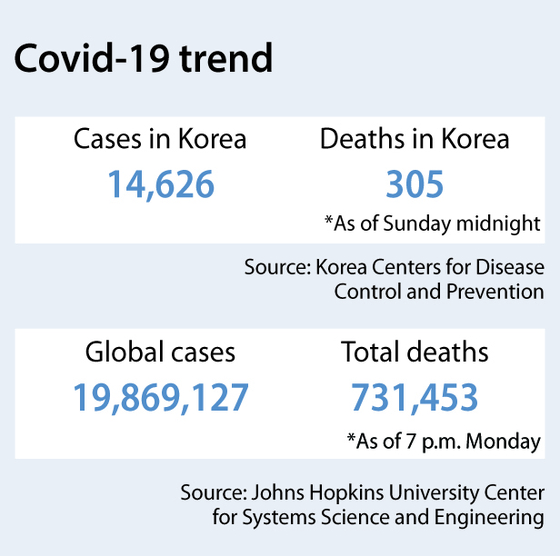 Namdaemun Market is Korea’s largest traditional market. It's visited by some 4 million people annually, including many foreigners. Health officials said one silver lining in the Kennedy Complex cluster was that the building is not part of the most popular streets of the market, which lessens the possibility the cluster would spiral out of control.

A makeshift Covid-19 testing site was set up at Namdaemun Market on Monday morning for anyone who thinks they may have had contact with the Kennedy Complex merchants.

The cluster came as the Korea Centers for Disease Control and Prevention (KCDC) announced Monday morning that 28 people were newly diagnosed with the coronavirus on Sunday nationwide, including 11 imported cases.

Among the 17 local infections, 11 patients live in Seoul, five in Gyeonggi and one in Busan. Of the imported cases, three were from the United States, two each from the Philippines and Bangladesh and also one each from Russia, Afghanistan, Finland and Burkina Faso.

No Covid-19 patient died Sunday, and 16 recovered. As of Sunday at midnight, 305 people had died in total in Korea, while 13,658 people had been declared fully recovered.

KCDC Director Jung Eun-kyeong said Monday afternoon in a press briefing that Korean health authorities recently found three new strains of the coronavirus from imported cases that previously hadn't been reported to the World Health Organization (WHO) by another country — two from Pakistan and one from Uzbekistan.

Jung continued that the Korean government relayed the three new strains to the WHO, and that further examination was underway.

Namdaemun struggles to catch up with a contactless world