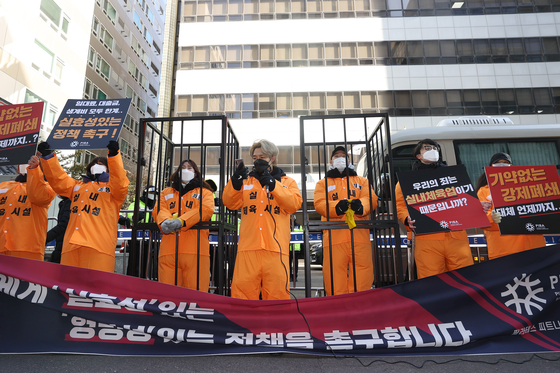 Pilates and gym owners rally outside the ruling Democratic Party (DP) headquarters in Yeongdeungpo District, western Seoul, Tuesday, demanding the government “save” their livelihoods. Indoor sports facilities in the greater Seoul area have been forced to shut for about a month to curb the spread of Covid-19. [YONHAP]

The plea came as the country added 715 new infections Monday, markedly down from 1,020 cases the day before.

Sohn Young-rae, a spokesperson for the Central Disaster Management Headquarters, said in a Tuesday press briefing that the government was both sorry and “sincerely thankful” to gym owners in the greater Seoul area who have been forced to close for several weeks due to surging Covid-19 cases, and asked for their continuing cooperation.

Sohn pointed out that seven clusters emerged from indoor sports facilities last November when they opened, which in total led to 583 Covid-19 infections. Cases were traced to gyms, a swimming pool, billiard hall, table tennis center and aerobics center, he mentioned. 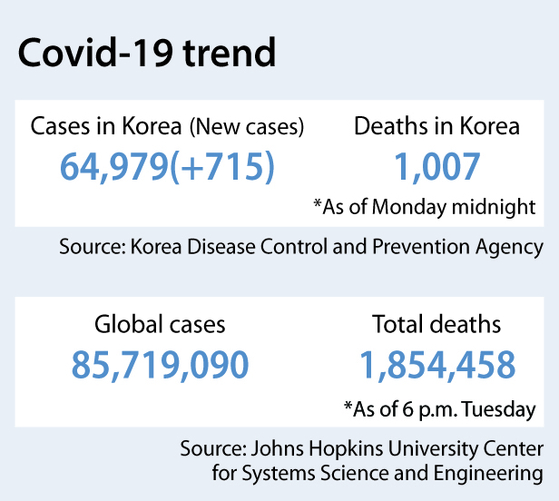 Since indoor sports facilities in the greater Seoul area were forced to shut down in early December, there hasn’t been a single cluster traced to such businesses, Sohn stressed.

The greater Seoul area, also known as the Seoul metropolitan area, comprises Seoul, Incheon and Gyeonggi. Indoor sports facilities in most areas outside greater Seoul have been allowed to operate throughout the day except between 9 p.m. and 5 a.m.

Sohn said if coronavirus cases fall over the next two weeks, the government could allow the closed businesses to reopen under strict guidelines — but didn’t mention how much infections would actually have to drop for that approval to be granted.

“I’m sure it’s difficult [to shut down your business], but please wait for about 10 more days and cooperate,” Sohn begged.

Across the nation, owners of gyms, billiard halls, indoor golf driving ranges, clubs and hagwon (private cram schools) are banding together to sue the government for financial losses as extended social distancing measures went into force this week.

Under these measures, many types of businesses that involve close physical contact have been forced to either shut down entirely or restrict operating hours, leading to mounting financial losses. The plights of these businesses gained fresh attention Sunday when news of a Daegu gym proprietor committing suicide spread online, raising questions as to whether he died due to the economic fallout of the forced closures.

Daegu police are investigating his motive.

A Blue House petition urging the government to allow indoor sports facilities to reopen has garnered some 200,000 signatures less than a week since it was started.

Some gym operators protested Tuesday by turning on all their lights without actually accepting any customers, a silent movement that the head of an online forum of gym owners said is being participated in by hundreds of people.

In Gwangju, some nightlife businesses, such as nightclubs, staged a similar protest by turning on their lights as well. 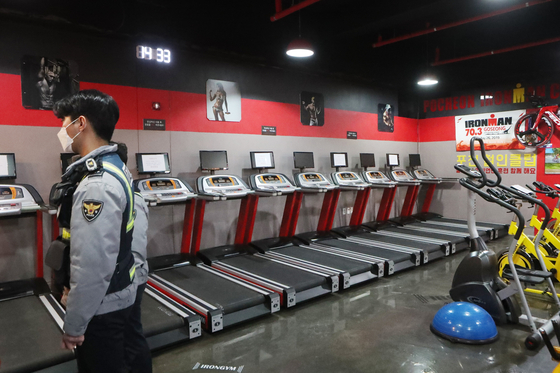 A police officer looks around a gym in Pocheon, Gyeonggi, Monday, to check for any violations of social distancing rules after the gym owner opened his business in defiance of the government’s shutdown orders on all indoor sports facilities in the greater Seoul area. [YONHAP]


Among 715 people who were diagnosed with the virus Monday, 672 were due to domestic transmission, according to data from the Korea Disease Control and Prevention Agency (KDCA).

There were 214 cases detected in Gyeonggi, 193 in Seoul, 48 in Incheon, 32 in North Chungcheong, 31 in Daegu, 27 in Gangwon, 24 in North Gyeongsang, 23 in Gwangju, 21 in South Gyeongsang, 18 in South Chungcheong, 14 in Busan, eight on Jeju Island, seven in Daejeon, and four each in North Jeolla, South Jeolla and Ulsan.

Among Korea’s 17 major cities and provinces, Sejong City was the only region that didn’t see a single new case.

The remaining 43 cases were imported — 25 from the United States, three from Indonesia, two from Ukraine and one each from Nepal, India, Russia, Kazakhstan, Japan, Pakistan, the Netherlands, Croatia, Greece, Sweden, the Democratic Republic of Congo, Sudan and Burundi.