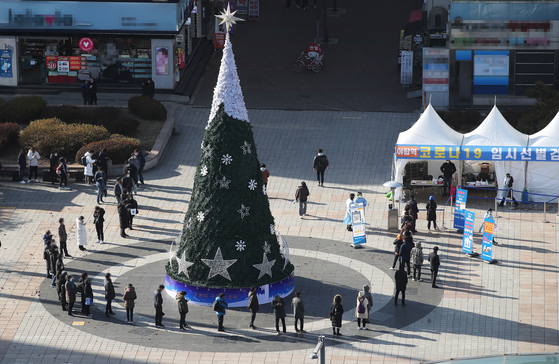 People wait in line outside a Covid-19 testing site in Seongnam, Gyeonggi, Thursday to get tested. [YONHAP]

The Korea Disease Control and Prevention Agency (KDCA) announced the grim milestone on Christmas Day Friday, as health authorities try to curb the outbreak with more social distancing restrictions to no avail.

The remaining 25 cases were imported — nine from the United States, six from Indonesia, two each from Uzbekistan and Russia and one each from the Philippines, Kazakhstan, Poland, Finland, the Democratic Republic of Congo and Niger.

National parks and popular Jan. 1 sunrise spots will shut down during the same period, while hotels, resorts and guesthouses must keep half their rooms vacant.