18 percent of North Koreans now thought to own mobile phones

18 percent of North Koreans now thought to own mobile phones 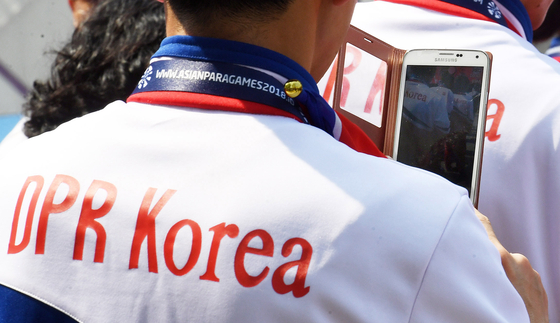 A North Korean athlete holds a cell phone during an event designed to celebrate athletes’ entrance on Oct. 4 in 2018 ahead of the 2018 Asian Para Games held in Indonesia. [Joint Press Corps]


Mobile phones are becoming more popular in North Korea, with roughly 18 percent of the population now thought to own heavily-restricted smartphones and feature phones.

The number of mobile phone subscribers in the North is estimated to have reached 6 million, or roughly 18 percent of the entire population, according to a report released by a research center at Korea Development Bank (KDB) on Tuesday.

Kim Min-kwan, a researcher at KDB Future Strategy Research Institute, said that the actual number is likely to be lower, at 4.5 million, given that affluent merchants are likely to own more than one device.

The report cited increased economic activity by merchants supplying goods to unofficial markets and the evolving shopping habits of young people as the reasons for the broader adoption.

A large portion of cell phone users are centered around wealthy cities like Pyongyang and Rason, where the mobile phone subscription rate stood at over 70 percent among those in their 20s through 50s, according to the report.

Still, the technological state of those phones lags behind that of many countries as 3G, or the third generation of wireless mobile telecommunications, remains the top technology in the country.

As a joint venture between Egypt’s Orascom Telecom Media and Technology Holding (OTMT), Koryolink had held exclusive rights to provide telecom services until 2012.

Founded in 2012, Kang Song NET is a state-owned telecom provider created at the expiration of Koryolink’s exclusive contract.

Byol is a joint venture with Thailand’s Loxley Wireless, built in 2015.

Pyongyang claims that it manufactures smartphones on their own, but the products are primarily built on parts or sometimes phone devices made in China.

The report said that the manufacturers put together the parts and adjust the applications and operating system.

The latest premium smartphone models come with comparable specifications to the Samsung Electronics Galaxy A7, a low-cost device released back in 2018.

The authorities in the North have banned internet access for many of the smartphones sold in the country, deactivating networking systems.

Instead, the country's closed Kwangmyong intranet is permitted for educational purposes.

Some models like the Arirang171 do have a Wi-Fi module, but authorities are able to track users’ content consumption.

Kim predicted that the wider use of smartphones could lessen North Korea’s tight control on its people.

“The addition of eavesdropping and security functions reveals that the leadership in the North are concerned for the possibility of smartphones eroding its ability to control its people," he said.