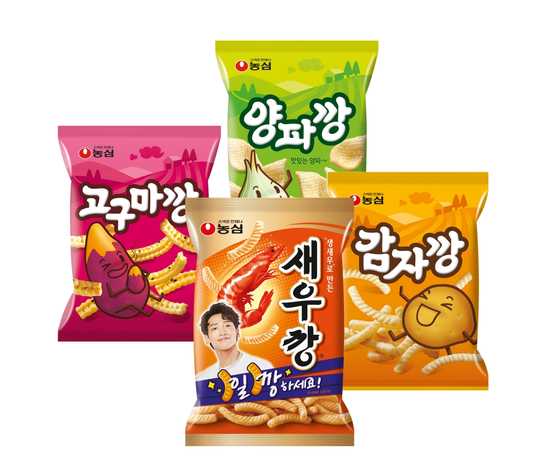 
For Nongshim, when it rains, it pours.

The iconic brand has found that four of its products have names that rhyme with the title of a song by Rain, a veteran entertainer in the midst of a comeback.

This is at least the third example of dumb luck for the company. Two of its products happened to show up in a scene in Oscar-winning "Parasite" (2019), while the Covid-19 pandemic led to a boom in instant noodle consumption.

The product in question is Saewookkang, which was first introduced in 1971. In 2017, Rain released a song entitled “Gang.”

The song was originally considered a misstep in Rain’s career due to its narcissistic lyrics and outdated choreography and visuals. But it quickly became a viral hit after some wisenheimers started remaking scenes from the music video to ridicule the singer.

Nongshim made the call and in June signed a deal with the singer-actor to do a commercial for the shrimp-flavored cracker. In the ad, Rain buys a package of the snack, takes a bite and breaks into a song-and-dance routine.

“The commercial raised awareness of not only Saewookkang but other ‘kkang-named snacks we make,” said an official from Nongshim.

The others are Yangpakkang, Gamjakkang and Gogumakkang, which are onion, potato and sweet potato snacks, respectively.

Nongshim’s commercial became so popular it had more than 2.7 million views on YouTube just 40 days after it was released. The company said the video received more than 2,300 comments.

It said that sales of the four key products are up 40 percent on year.

Get ready for meme war (KOR)