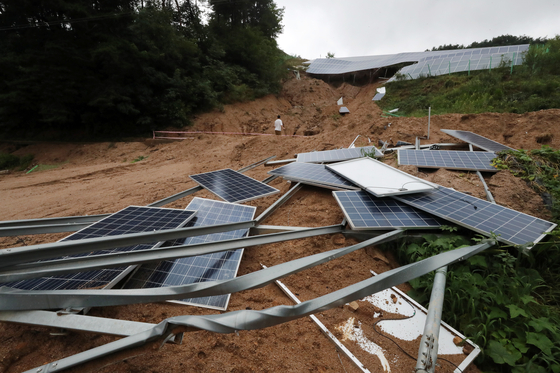 The solar energy facilities at Daerang-dong, North Chungcheong, are destroyed in the aftermath of torrential rains that caused landslides in the region on Tuesday. [NEWS1]


A total of 1,548 cases of landslides have been reported so far during this year’s unusually long rainy season, according to the Korea Forest Service (KFS), causing 99.3 billion won ($83.9 million) of damage.

“The Ministry of the Interior and Safety is cooperating with local governments to investigate the extent of the forestry damage and establish plans for recovery,” KFS said during a briefing on Thursday. “We will address the problems that we find during the process.”

Landslides have also resulted in seven deaths, with two people reported missing and four injuries as of Thursday. This figure could increase as investigations continue until Aug. 20.

The heavy rain has caused landslides at 12 solar energy facilities, 0.1 percent of the nationwide total, according to data from KFS.

Last Friday, the government raised the landslide warning to its highest-level across mainland Korea, with Jeju Island the only area not considered at severe risk. This was the first time in 53 years since the founding of the KFS that the highest-level warning was applied nationwide.


In order to minimize the damage, the KFS expanded its primary investigation of vulnerable regions from 5,000 to 20,000 areas and is planning to designate specific locations that need special provisions. It is also implementing a system that warns residents of landslides 24 hours in advance, instead of the current 1-hour warning system.

Among the 12 damaged solar energy facilities, nine were authorized for construction during the Lee Myung-bak administration or earlier, with three approved during the Moon Jae-in administration.

There were five solar energy facilities that were still being constructed when landslides occurred. KFS and local governments have completed emergency measures, such as earth restoration, at the 12 affected areas to prevent further damage.

“We will work hard to ensure that the residents will be able to take back their ordinary lives after this emergency restoration,” said Park. “Regarding the administrative and systematic problems that surfaced amid the response to the local heavy rains, we will promptly prepare measures for improvement.”