No light at end of the jobless tunnel

No light at end of the jobless tunnel 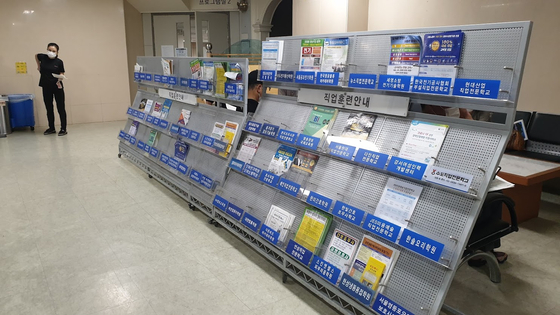 Pamphlets that list vocational programs are placed on the shelves at the basement level of the Southern Job Center in western Seoul last Tuesday. 40 people showed up for a session on unemployment allowances on that day. [JOONGANG ILBO]


Ms. Kim is in her 60s and needs a job. She worked for a fast food restaurant in downtown Seoul for 14 months, but was recently laid off. Last Tuesday, she found herself at an educational session about unemployment allowances in the basement of the Southern Job Center in western Seoul.

According to Statistics Korea, there were 1.13 million people in Kim’s situation as of July. A government report released on Aug. 12 said the number of unemployed was the second highest since the agency started collecting relevant data in July 1999, when the number was 1.47 million.

“A couple of months of unemployment allowances are not comforting,” said Kim. “I still have the capability to work, so I want to earn a monthly salary while I can.”

Judging from the scene in the basement of the Southern Job Center, the coronavirus obviously does not discriminate on the basis of age in terms of taking away jobs. Around 40 people were gathered of all ages, from a man in his 30s to another in his 60s who looked like he came from a construction site.

The phones at the unemployment services are ringing off the hook. People dial 1350 to reach the hotline for unemployment allowance consultation services, and at any given moment there are 50 people waiting to be connected to an agent.

At the center, a worker hands out 50-page pamphlets that list employment education programs funded by the government.

Unfortunately, his job is only part-time. “I have occasionally worked part-time jobs since the end of last year, and I have been getting more work lately,” said the man giving out the pamphlet.

The coronavirus shock on the job market has been intensifying. According to the Ministry of Employment and Labor, the number of unemployment allowances distributed in July marked a record of 1.19 trillion won ($1 billion), a 177 percent increase from last July’s 429.6 billion won.

The hotel and aviation industries have been dealt a major blow. Mr. Jeon, an Eastar Jet employee in his 40s, said his parents and in-laws have been supporting his family since February because his salary has been cut.

“I have been increasingly concerned about not being able to afford my child’s kindergarten fees,” said Jeon. “I don’t think I can even afford to pay for signing a contract for apartment subscription, which I have been preparing for years. I don’t know how much longer I will have to wait until I own my own home.”

The hotel industry is starting to see labor conflict. The labor union of the Millennium Hilton recently held a rally demanding a stable employment environment.

“The union has been listening to management's demands for mandatory holidays and unpaid leave, but the hotel responded with a one-sided decision for a restructuring schedule,” said Choi Dae-geun, the hotel's union chief in a recent call with the JoongAng Ilbo.


The coronavirus crisis and the lengthy rainy season have sapped any hopes for a rebound in the performance of hotels. Chains such as Lotte Hotels & Resorts have put voluntary resignations on the table.

According to the Statistics Korea’s report released on Aug. 12, the unemployment situation was the worst for the hospitality and restaurant industries. The number of employed in that sector dropped by 225,000 on-year in July, compared to 127,000 in wholesale and retail, 89,000 in education services and 53,000 in manufacturing.


“I was working for a small IT company that makes websites until I was asked to resign,” said Mr. Park, 43, who was at the Western Job Center in Mapo District, western Seoul last Wednesday. “I need to stay strong looking in front of my kids, but I can’t help but feel hopeless.”


“Our sales dropped by more than 15 percent on-year,” said an employee of a medium-sized chemical company. “I am still holding on, but there are no other answers besides restructuring in this situation.”

According to the Ministry of SMEs and Startups, the average operations ratio for the manufacturing sector has been around 60 percent for five consecutive months, after recording 69.6 percent in February.


This was the first time in 11 years — since April-August 2009 — that the average factory operations ratio was stuck in the 60-percent range for five consecutive months.


The shock in the labor market is expected to last for a while. Major companies have been postponing recruitment of new employees, which signals worse numbers to come.


A Korea Chamber of Commerce and Industry (KCCI) survey of 301 companies, including both conglomerates and SMEs, conducted via email, showed in July that 31.2 percent of the companies postponed recruitment plans. 19.3 percent of the respondents said they have stopped hiring.

“There are many companies that have postponed wage negotiations to the latter half of the year due to the virus outbreak," said the KCCI. "The uncertainties in the labor market will continue because the chances of a second coronavirus shock cannot be ruled out.”