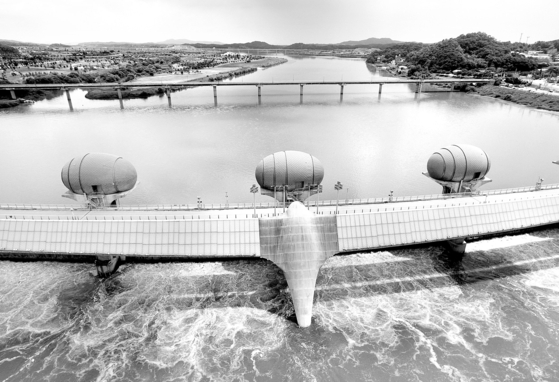 Ipo Weir, built on a tributary of the Han River running across Yeoju City, Gyeonggi, for instance, was criticized by the Board of Audit and Inspection in the Moon Jae-in administration in 2018 for its poor performance. [NEWS1]

The longest rainy season on record ended on Aug. 16. It easily surpassed the existing record of 49 days in 2013, lasting for 54 days. It resulted in significant damage. As the monsoon season ended, the government received a devastating report card for summer safety. With the seasonal — and localized — torrential rain, 35 people died and 7 are missing.

A landslide in Gokseong County, South Jeolla, which killed five, and the boat accident in Uiam Lake, in Chuncheon city, which resulted in four deaths and two people missing, are accidents for which the government cannot avoid responsibility. President Moon Jae-in’s promise to ensuring that the state would be responsible for people’s safety is fading.

As the rainy season ends, the Four Rivers Restoration Project is mentioned as responsible for incurring damages. At the meetings with the Blue House secretaries and aides on Aug. 10, Moon said that it was an opportunity to prove and analyze how the reservoirs on the four rivers contribute to flood control.

The political debates over the Four Rivers Project are unprecedented. The Lee Myung-bak administration spent 22 trillion won ($18.5 billion) on the project from 2009 to 2013, amid much scrutiny. A civilian-government joint evaluation committee in the Park Geun-hye administration concluded in 2014 that the risk of flooding around the main stream of the four rivers had diminished. In the Moon Jae-in administration, the Board of Audit and Inspection (BAI) conducted an independent inspection, finding that the value of preventing flood damages around the four rivers was zero.

The Four Rivers Project received extremely different evaluations when the administration changed. Former Ohio State University Professor Anthony Greenwald’s “beneffectance” concept can serve as a means to understand the government’s decision. The core of the theory is that it is within human nature to be generous to oneself.

In an interview with The New York Times in 1984, the professor explained that students who received good grades would say the questions were great to verify their competency, but those with bad grades would say the test was not fair. No matter what excuse the Moon administration makes, it can hardly deny that it received a mediocre grade on its response to the rainy season.

The restoration of Gyeongbok Palace (KOR)