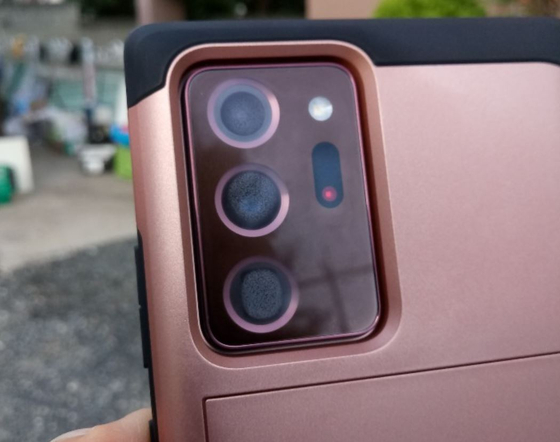 A user shared a photo on an online community showing a Galaxy Note20 Ultra with condensation visible over all three camera lenses. [SCREEN CAPTURE]


Samsung Electronics has started an internal inspection after multiple users complained that the cameras on the new Galaxy Note20 Ultra are fogging up.

“We are in the process of collecting the models in question to verify the issue,” a spokesperson at Samsung Electronics said on Tuesday.


“At the current stage, we see the issue taking place in connection with the device’s waterproof functions."

The spokesperson, however, declined to comment on any possible compensation measures for affected customers, adding that the result should first come out.

Dozens of YouTubers and users of online communities — all of whom got the upcoming smartphone through preorders — posted pictures and videos appearing to show the lenses of the protruding camera array covered in condensation.

Some users reported that they noticed the issue after getting into an air-conditioned car, indicating that the drastic change in temperature might cause the problem.

Staff at Samsung’s repair service centers played down the issue as “a natural phenomenon for other smartphone models with the same waterproof mechanism used in the Galaxy Note20 Ultra,” according to a member of an online community for Samsung smartphone users who spoke to an official at a service center.

They explained that some moisture could enter through the venting hole of the waterproof Gore-Tex membrane used in the device to maintain internal pressure. When exposed to extreme changes in climate, fogging could take place.

The explanation, however, was quickly challenged by some tech YouTubers who set up an experiment to see if other recent Galaxy models show the same problem.

A YouTuber called Techmong compared the Galaxy S10+ and Galaxy S20 Ultra with the Galaxy Note20 Ultra on a video posted on Aug. 16, with only the Note20 appearing to show condensation during the test.

In the video, Techmong placed the phones in a hot place and then moved them into a car and put them on holders mounted over the air conditioner vents with the temperature set to 18 degrees Celsius (64.4 degrees Fahrenheit).

Another YouTuber named TheSinza carried out a similar test, but with the Galaxy Note10+ and Galaxy S20+. Again, only the Note20 Ultra camera fogged up.


TheSinza told the Korea JoongAng Daily that he received the Note20 Ultra on Aug. 13 and tested it between Aug. 15 and 16.

The Galaxy Note20 series is set to be officially released on Aug. 21, following preorders that ran from Aug. 7 through 13.

Samsung thinks outside the box with new Galaxy S22