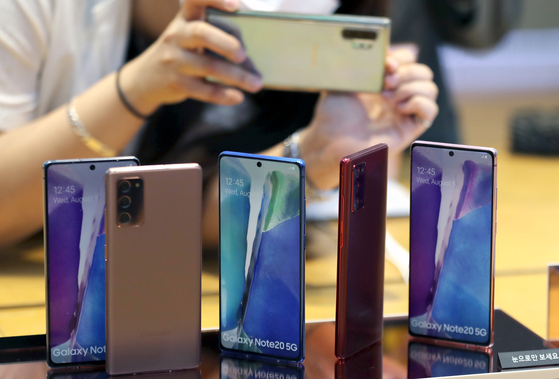 
Samsung Electronics’ Galaxy Note20 set a new record for the number of new smartphones activated on a single day on Friday, at 258,000 units.

Samsung activated the Galaxy Note20 phablets on Friday, meaning that anybody who had preordered the device could turn it on and use it.

The smartphone isn't on sale in stores yet, so the new record signifies how many people preordered the phone and turned it on. The previous record was held by the Galaxy S8 in 2017, with 250,000 devices activated. The Note20 did not have the most preorders — over 1.3 million Note10s were ordered in advance — rather, just the highest number activated.

Based on preorders placed between Aug. 7 and 13, Mystic Bronze was the most popular color option. The larger Note20 Ultra sold better than the Note20, with 65 percent of sales.

The Galaxy Note20’s record of 258,000 devices activated on the first day is 10 percent higher than the Galaxy Note10, according to Samsung Electronics.

Although Note20 orders were still significantly lower than those of the Note10, the general assessment in the mobile industry is that the Note20’s performance so far is not bad considering retracted consumer demand amid the Covid-19 pandemic.

The Note10's 1.3 million preorders also came during a longer promotional period and cutthroat competition among mobile carriers offering promotions and discounts in an attempt to secure more 5G subscribers.

Having pledged to refrain from such activities this year, mobile carriers are offering much lower promotional discounts.

What’s also notable about the Note20 preorders is the increase of buyers that ordered the device through Samsung Electronics’ official website or online retailers like Coupang. In Korea, the most popular retailer for phones has always been the mobile carriers’ stores.

According to Samsung, the proportion of devices ordered independently from mobile carriers was well above 10 percent. The Note20’s most popular color option Mystic Bronze even temporarily sold out on Coupang at one point.

“Despite factors like Covid-19 and smaller promotions, the early performance for the Galaxy Note20 has been pretty good so far,” said a mobile carrier source. “But we need more time to see if this positive trend continues in the long term.”