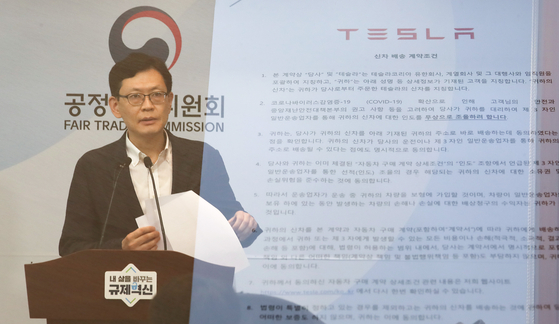 
Tesla has been ordered by the Fair Trade Commission (FTC) to fix five terms in its sales contract that the regulator deemed to be unfair.

This comes after complaints were lodged by some customers about sales contracts for Tesla’s popular Model 3. The electric vehicle (EV) maker was said to have voluntarily complied on Aug. 14, after the problematic lines were flagged by the FTC.

Under the revised contracts, Tesla will have to take responsibility for any damage caused to vehicles before delivery. Previously, the carmaker capped damages at 100,000 won ($84) if any damage was found by the customer.

The FTC also ordered Tesla to take responsibility for any damages that occur to the car even if the customer is late for pickup.

Tesla sometimes delivers its products to designated locations. The EV maker was previously only responsible for damages or defects that occur during the promised delivery period, which means it did not compensate for any damages that occurred after, even if the delivery was delayed.

“Unless the customer refuses to take the product or cancels the contract, Tesla has the responsibility to deliver the products to the customers even after the promised delivery period, and should be responsible for damages or defects,” the FTC said.

Tesla’s arbitrary cancellation policies will be corrected as well.

In its previous contract, Tesla could cancel deals if the carmaker confirms the customer is making orders or purchases with “malicious intent.” The FTC requested the company to clarify the word “malicious,” as it can lead to possible disputes between the company and the customer.

In response, the EV maker clarified the term "malicious". From now on, Tesla will cancel deals only if the customer is proven to have purchased the car to resell it or if the car is to be used "for criminal activities.”

Another fix is related to the venue for claims. Tesla had previously required customers to take their cases to the Seoul Central District Court. That restriction has been lifted. Telsa is also now required to get the consent of the customer if control of the contract is handed from the company to another party. Before, Tesla could do this unilaterally.

“We were able to prevent customer damage as well as provide institutional grounds to protect the rights of customers by correcting unfair terms of the world’s No.1 EV maker,” said Lee Tae-hui, an official from the FTC.

The FTC said the changed terms will take effect with all new purchases made after the announcement on Tuesday.

In June, the Ministry of Land, Infrastructure and Transport requested the Korea Automotive Technology Institute check for defects as customer complaints grew over Tesla’s best-selling Model 3.