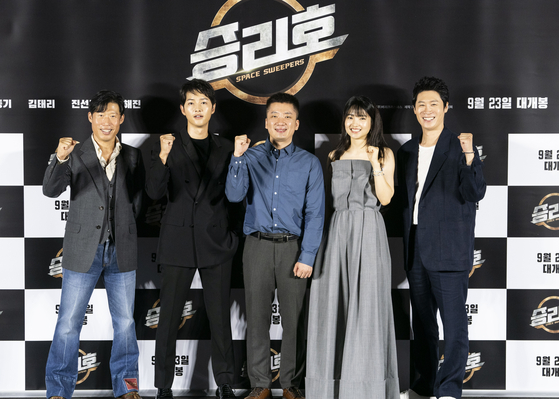 
Over the centennial of the local film industry, sci-fi space blockbusters strictly remained within the boundaries of Hollywood due to the daunting scale and massive budgets needed — that was until “Space Sweepers,” which is finally set for release on Sept. 23 after multiple delays due to the Covid-19 pandemic and hopes to break the mold.

Originally set to premiere locally during the summer, which is normally the perfect season for a film release as people stream into cool theaters to take a break from the sweltering heat for a few hours, "Space Sweepers," similar to other films, pushed back its release until the infected cases subsided.

And it looked like the shaken film industry could finally be on its way to recovery — for instance, actor Hwang Jung-min and Lee Jung-jae’s action film “Deliver Us From Evil” reached its break-even point in just 12 days since its local premiere.

“Space Sweepers” was to hold its press event offline, the first time in months for a local film to host an event with press attendance since the virus outbreak.

Although the event was moved online as the cluster of new infections took a swing upwards to three-digit numbers, the film is still one of the most anticipated releases of the year not only due to its setting, but also thanks to its star-studded cast of actors including Song Joong-ki, Kim Tae-ri, Jin Seon-kyu and Yoo Hae-jin.

The film also marks the reunion of director Cho Sung-hee and Song after their hit fantasy romance film “A Werewolf Boy” in 2012.

“Hello everyone, it’s been a while,” Song began with a bright smile. “I take on the role of the space pilot Kim Tae-ho in ‘Space Sweepers.’” 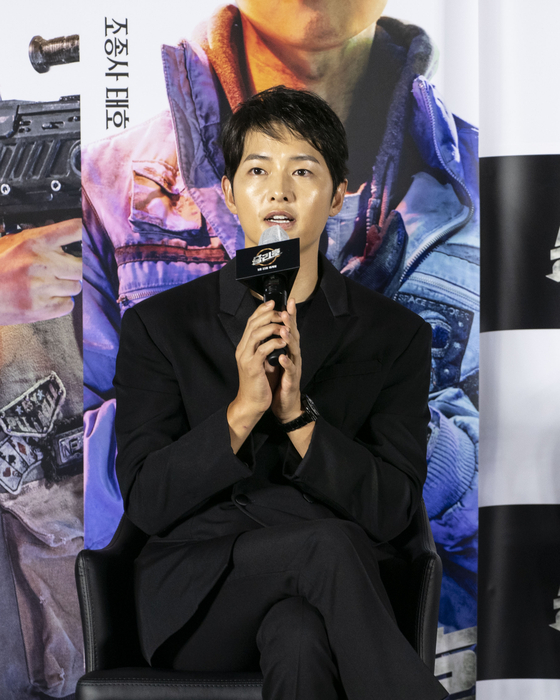 
The event was Song’s first public appearance in a year and two months since his divorce from actor Song Hye-kyo in July 2019.

According to the actor, he had initially heard about the story when he was filming “A Werewolf Boy.”

“This story began about a decade ago from a personal conversation with a friend,” director Cho said. “He told me about problems related to space debris and how dangerous it was because of its speed. Then I latched onto the topic of the laborers in space who collect the junk. Actually, I found out through my research that these people have already been mentioned in animated films and games.”

The film is set in the far future of 2092, when due to rapid desertification, plants no longer grow on Earth, turning the planet into an inhospitable place for humans to live. The classes are largely divided into two — the top five percent of the entire race which lives up in space, breathing fresh air through the plants they have grown in their own world, and the rest of the poor, who struggle to survive on the deserted Earth.

The protagonists, the sweepers, scavenge space looking for worthwhile junk to sell, and come across a humanoid robot called Dorothy, which was once classified as a weapon of mass destruction. 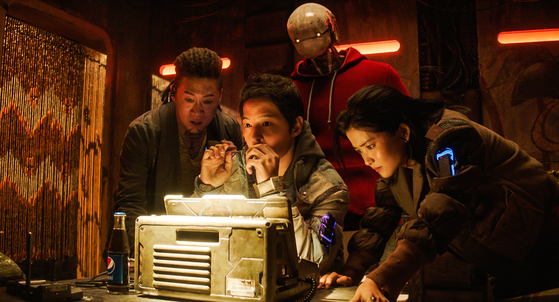 A scene from the film. From left, Tiger Park (played by Jin), Tae-ho (played by Song), Captain Jang (played by Kim) and at the back, Updongi the robot (played by Yoo). [MERRY CHRISTMAS] 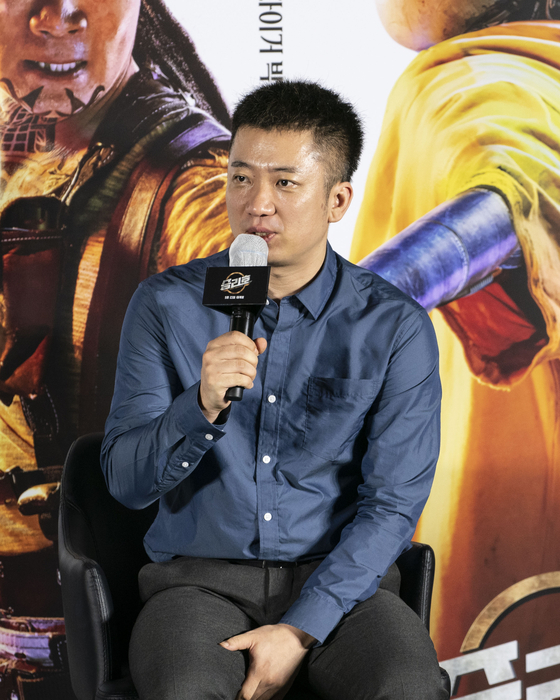 
“The space sweepers, although they live in space, they do not belong in the affluent society,” Cho said. “They are similar to immigrant workers — struggling to earn a living. Although the film is set in a completely different world from now, the characters inside the story are not that much different from people today. [The sweepers] still worry about mundane everyday problems like loans, interest rates and paying their bills on time. They still eat rice and doenjang jjigae [fermented soybean paste stew]. In this film, instead of these Hollywood heroes clad in fancy suits featuring all these superpowers, it’s about normal people — Koreans who zoom around space in their spaceship. That’s the biggest characteristic and difference the film offers [from other films].”

The space sweepers consist of Song, the pilot, Kim as Captain Jang, Jin as Tiger Park the space mechanic and last but not least, Yoo as Updongi, a fashionable robot who fishes out the debris from space.

“At first I was asked to lend my voice,” Yoo said. “But I thought it was better for me to be in the film so that I could be more involved in the character. The robot is actually cute — he’s fashion-sensitive, and he’s actually very humane.”

Apart from the genre, what drew Kim to the film was her character. 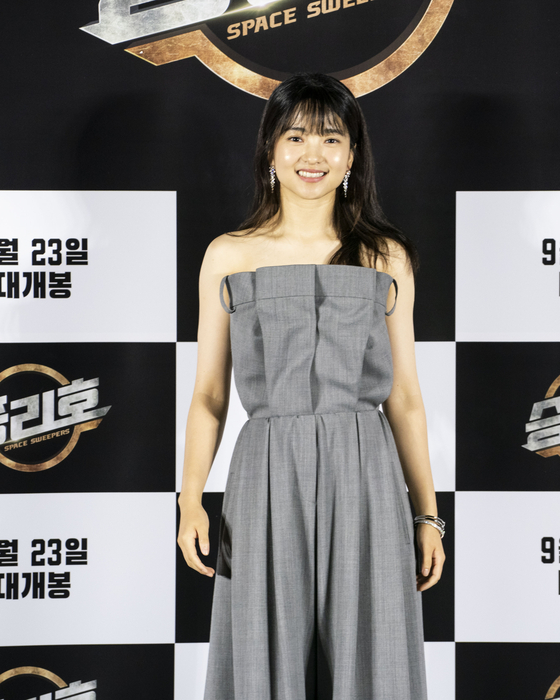 
“She’s the captain, the leader of her ship,” Kim said. “I don’t think there has ever been a [Korean] film in which a woman was a captain. What’s more, she’s very intelligent — smart enough to rebuild her own spaceship [from junk]. But I thought it would be too cliché if she was perfect in every way — so she is [also] humane in her own ways. In this film, it’s about being less than perfect — the characters each have their own flair of personality, and they’re all mixed up to create this familial atmosphere [in the ship].”

Song promised that the audience will get the ride of their lives through their film.

“I haven’t seen the whole film, but from the glimpses of what Cho has showed me, the scenes where we are in a hot pursuit or being chased, or the scenes where we harpoon the debris will leave the audience starstruck. I think they will find what they’ve been looking for when they see the film in cinemas.”

“I really took care to create a film that is meant to be seen on the big screen,” Cho said. “Due to the recent surge [of coronavirus cases] it’s hard to call out to the audience and ask them to view our film in the cinemas. But I fervently hope that by the time the film is released, the situation will be contained and people can enjoy our film with ease.”