Daumsoft changes its name ahead of possible IPO

Daumsoft changes its name ahead of possible IPO 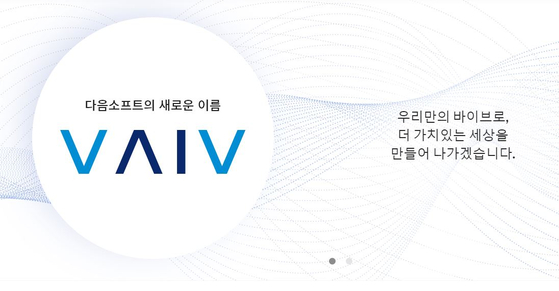 The rechristening was voted on and approved by the board on Aug. 14 and was done so the name better reflects the company's focus on artificial intelligence (AI).

Started as the venture capital arm of Daum Communications, which is now Kakao, VAIV company was spun off in 2000. In the early 2000s, the company was in charge of developing technology for the Daum search engine.

VAIV has recently been focused on collecting data, providing information based on analysis and evaluation, and offering insight regarding marketing strategies. The company generated 16.3 billion won ($13.8 million) in sales last year.

Over the past 10 years, the company’s Sometrend has been analyzing various industries, including finance, retail, manufacturing and media, based on over 20 billion pieces of data the company owns.

“Until now, the company has been focusing on business-to-business [B2B] business,” Song Sung-hwan, CEO of VAIV, said. “Now, we are planning to expand our business to business-to-customer [B2C].”

“Digital Twin,” one of the technologies that the Moon Jae-in administration is emphasizing in its Digital New Deal initiative, is also being pursued by the company. Digital Twin is a system that digitally reproduces a real-world object.

“We are currently working on a national project constructing Digital Twins for municipal administrations and the safety disaster sectors,” a spokesperson for VAIV said.

VAIV plans an initial public offering (IPO) by the end of the year. Korea Investment & Securities will supervise the IPO.

According to evaluations by credit bureaus Ecredible and Nice Dun & Bradstreet earlier this year, the company was given AA and A ratings, respectively.