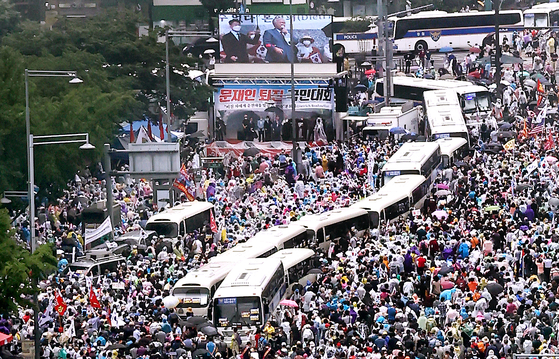 Members of conservative groups rally in Gwanghwamun, central Seoul, on Aug. 15, Korea’s Liberation Day, to denounce what they called the corrupt practices of the Moon Jae-in administration. [YONHAP]


Korea’s telephone companies are helping track down people who attended a big antigovernment rally on Aug. 15, which is linked to the biggest coronavirus cluster yet in the Seoul metropolitan area.


According to industry sources, SK Telecom, KT and LG U surrendered contact information from base stations near Gwanghwamun Square, where the rally took place, to local health authorities on Wednesday.


On Tuesday, the companies were asked by police and quarantine officials to submit base station data, which, under Korean disease prevention law, they are obliged to surrender.


People whose phone signals were detected by base stations in the Gwanghwamun area that day for more than 30 minutes will have their contact information provided to health authorities.


Around 20,000 people took part in the Saturday demonstration, including followers of Rev. Jun Kwang-hoon, a politically controversial figure and vocal critic of President Moon Jae-in.


Jun's Sarang Jeil Church in Seongbuk District, central Seoul, was linked to more than 623 confirmed coronavirus patients as of Wednesday 12 p.m., an undetermined number of whom took part in the demonstration.


As of Wednesday, health authorities had identified 10 participants in the Aug. 15 rally who tested positive for the virus but were not related to the Presbyterian church.


“This validates our worry that the rally itself has led to a chain of infection,” said Kwon Jun-wook, deputy director of the Korea Centers for Disease Control and Prevention, in a press briefing Wednesday.


Local authorities say they face numerous obstacles in contact tracing rally participants and followers of the church. A list of members submitted by the church included false contact information. Rumors have been circulating inside the community that the government is falsifying test results to make them positive for all its members.


In Seoul alone, 404 members of the Sarang Jeil church were not reachable, as their home address and phone numbers are unknown.


Article 76-2 of the Infectious Disease Control and Prevention Act states that telecommunication companies must comply with health authorities or local police requests to provide location information for patients or those likely to be infected with a disease as long as the measure is necessary to block the spread of infection. Normally, such location data is protected personal information that would require a warrant and court approval to be taken from a phone company.


Base stations constantly receive and transmit signals from mobile phones that enter its range. As long as a device’s power is on, it will connect to stations even if one does not make a call or send a message. These records can narrow down a phone's location to under 100 meters (328 feet).


The last time the government requested base station data was the outbreak of the Itaewon cluster in central Seoul in May. At the time, local authorities were having a hard time finding people who had gone to nightclubs. Mobile carriers at the time offered base station data on more than 10,000 people.