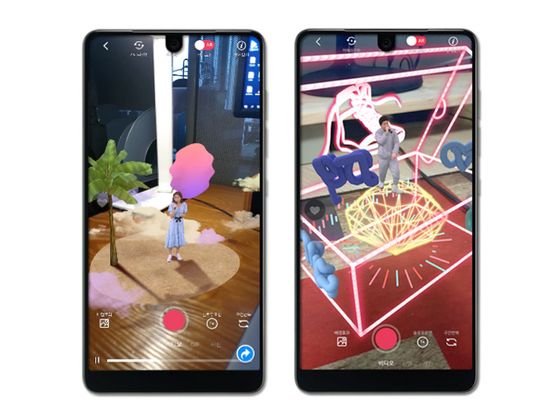 LG U+ launched an augmented reality (AR) concert feature that gives subscribers a virtual front-row seat to music concerts, at least inside their smartphone screens.

LG has offered AR videos of K-pop stars before, but mostly short videos or one- to two-minute clips. The videos uploaded on ARtist will show the performance of an entire song, filmed in person at LG U+’s +AR studio.

Augmented reality combines a virtual image on top of a real-life background as in the famous Pokemon Go mobile game. Through ARtist, users will be able to watch an artist perform on their desk, in their room and from all directions. They can also adjust the size of the artist inside the screen and take photos or videos as if they are present beside the performer.

“Watching artists sing or perform can be done on other services as well. The significance of AR concerts is that they allow people to virtually co-exist with the stars, in the same frame,” said an LG U+ spokesman.

The AR concerts are offered for free on LG U+’s app for the mobile carrier’s subscribers. New AR videos will be uploaded every two weeks. In the future, the company plans to include performances exclusively arranged for the AR platform.

“U+ ARtist is a next-generation format in music performance that’s likely to see demand increase at a time when ‘untact’ is becoming an established norm,” said Space Oddity, LG’s local partner in the project and a local start-up that’s produced videos of big names like Billie Eilish. "Untact" is a Korean term that uses the prefix “un” to create a new word meaning the opposite of contact.

Danuri heads to the moon and takes Korea into space club