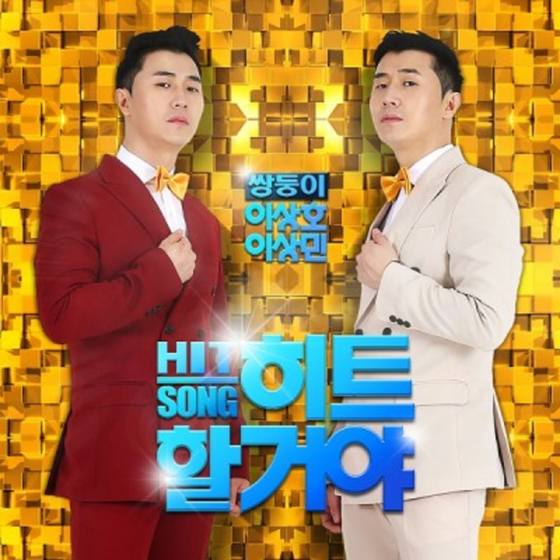 Just like many others who are expanding their career into trot music amid the current craze for the genre, Korea's leading identical twin comedians, Lee Sang-min and Lee Sang-ho, have also hopped aboard the trot train with their release of a song titled “Hit Song” last month.

But surprisingly, this is not their first time releasing trot music. The duo already released a trot song “Lonely” (2017) three years ago, and this is their second time releasing a song under their stage name, Twins. 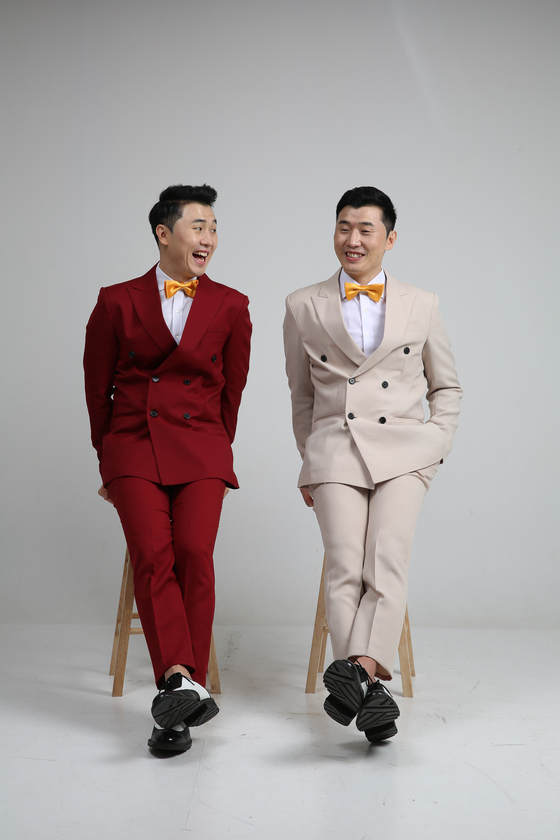 Twins sat down with the Ilgan Sports to share the new challenge they are facing as trot duo after their long-running program "Gag Concert" came to end in May. The following are edited excerpts.

“We released our first trot album in 2017 before the trot craze started. At that time, we just wanted to have a good time with the audience. But as the trot music industry has grown bigger and so many talented trot singers are pouring out, we have become more sincere in how we treat our music. That is why we are taking vocal lessons. Of course, we got a lot of help from others and we even participated in writing the music and the lyrics for our latest song."

While the Covid-19 crisis continues, “Hit Song” sends out a message to cheer up and revitalize amid the pandemic. The energetic beat makes listeners move their bodies to the rhythm and refreshes their mood.

"The public is suffering from the so-called corona blues, or corona-related loneliness due to the prolonged Covid-19 outbreak, and it was even more difficult for us comedians after 'Gag Concert' ended. We wanted our music to change this depressing mood by sending out cheerful energy."

The Lee brothers debuted in 2006 as “twin comedians” through the long-running KBS comedy show “Gag Concert,” which ended in May due to low viewer ratings.

“We lost our jobs as soon as the show ended. It felt as if my hometown suddenly disappeared. But the situation is even worse for junior comedians who lost their jobs before getting fame from the show. Some of them chose YouTube, but others quit being comedians and chose to go on a completely different path. We knew this time would come eventually, but it was still heartbreaking. When the airing time changed from Sunday evening to Saturday evening, many suggested that the time is near. But we feel the end came too early.

“The public criticized that we comedians ran out of ideas, and all of the ideas seemed repetitive. And since we had to follow the terrestrial television broadcasting standard, we couldn’t use any sensitive topics, while the standards are less strict in cable channels or on YouTube. But of course, the fault is in our comedians too, for not trying harder."

As the title “Hit Song” hints, the twins are eager for a hit. But because all events that usually invite comedians and trot singers to lighten up the mood are canceled due to the Covid-19 risks, the duo hasn’t had a chance to hear many comments from the public yet.

"There are no events nor TV shows for us to perform at or on, so we haven't got much feedback yet. I heard that succeeding as trot singers requires patience. We are hoping that we will someday make a real hit — within three years! [laughs]."

Although the two sometimes face conflicts due to a clash in personalities, they have no plans on working alone or pursuing different careers.

“There are just more positives to working together than negatives. By being together, we can always watch each other’s back. Sticking together has become such a norm for us that if one of us happens to be alone, colleagues ask, 'Where is your twin brother?'

Twins said they wish to focus on music for the time being by taking vocal lessons and preparing for auditions as trot singers.