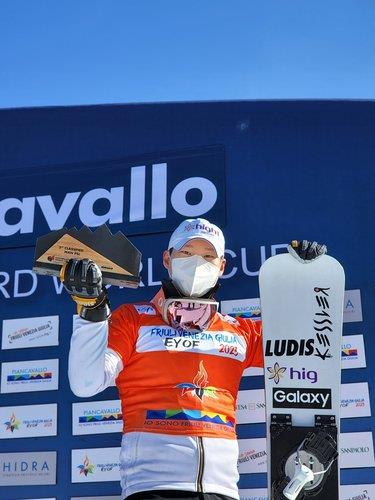 It gave Lee 604 points in the World Cup standings and made him the 2021-2022 season overall champion, 98 points ahead of Stefan Baumeister of Germany.

For the season, Lee collected one gold, two silver and four bronze medals, including one from a mixed team event.
He has been making Korean snowboard history throughout his career.

In March 2017, Lee became the first Korean snowboarder to win a World Cup medal. Then on home soil at the 2018 PyeongChang Winter Olympics, Lee captured silver in the parallel giant slalom, becoming the first Korean medalist in an Olympic skiing discipline.

Lee had been a heavy gold medal favorite at the Beijing Winter Games last month but was knocked out in the quarterfinals by 0.01 second.