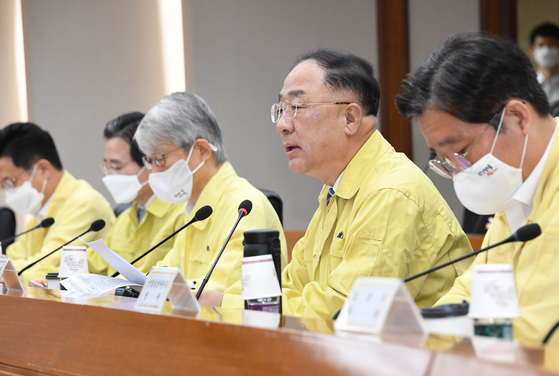 FInance Minister Hong Nam-ki, second from right, attends an emergency meeting in Seoul on Thrusday. On his Facebook post, Hong emphasized the narrowing income gap between the poor and the rich. [YONHAP]


Household incomes rose in the second quarter despite the impact of the coronavirus on the economy. Spending was up as well.

However, these increases were bolstered by government stimulus payments as incomes earned from jobs actually saw the sharpest decline since data started being compiled in its current form in 2003.

Additionally, incomes from jobs and private businesses of the poorest 20 percent of Koreans plummeted, proving that the poor are suffering the most from the pandemic.

That increase in average household incomes was the sharpest since the first quarter of 2014's 5 percent year-on-year growth. Additionally, it was larger than growth in the first quarter, which was 3.7 percent.

The shrinkage in labor incomes was only the second since data started being compiled in its current form in 2003. The other time was in the third quarter of 2009 during the global economic meltdown, when the average monthly household income fell 0.5 percent year-on-year.

Property income, which includes incomes made from rent and investments, shrunk 11.7 percent year-on-year.

The only area that saw an increase was government transfers, which included the government’s emergency relief grants of up to 1 million won given to every Korean household in May.

On Facebook, Finance Minister Hong Nam-ki celebrated the increases for the bottom 20 percent.

“The gap by income level when compared to the previous year has shrunk,” Hong wrote. “In times of crisis, the income gap usually worsens especially because those in lower-income households are more affected in terms of job security. This Covid-19 crisis is said to be the worst economic crisis and recession since the Great Depression.”

He said the reason the income gap narrowed was the government’s efforts, including the emergency relief grants, vouchers for low-income household and other emergency welfare support.

But income from jobs among the bottom 20 percent shrunk 18 percent to 485,000 won compared to a year earlier, the sharpest drop among all households.

This was a contrast to the top 20 percent, whose income from jobs fell only 4 percent 6.9 million won.

The sharp decline in labor income in the bottom 20 percent comes from people losing jobs. In the second quarter, the number of people employed was 407,000 fewer compared to the same period a year ago.

In incomes earned through running private business, the bottom 20 percent saw a decline of 15.9 percent, the sharpest among all households, whereas in the top 20 percent, the decline was only 2.4 percent.

The statistics do not include people living alone, currently accounting for 30 percent of all households.

In terms of spending, the impact of the coronavirus was clear.

Spending on food and beverages went up 20.1 percent while spending on home appliances and services rose 21.4 percent. Both were boosted by people spending more time at home.

Spending on entertainment and culture dropped 21 percent, and spending on education dropped 29.4 percent.

The Finance Minister on his Facebook post said the government will remain alert and try to support low-income households as uncertainties loom in the third quarter due to a resurgence of the coronavirus.

“The government will employ every policy capacity that would recover incomes including reinforcement of the domestic market's vitality including the swift execution of a third supplementary budget as well as pushing of the Korean New Deal,” Hong said.

During an emergency government economic meeting, Hong announced that next year the government will allocate 20 trillion won to the so-called Korean New Deal.

If approved, the Korean New Deal budget will account for 4 percent of next year’s budget proposal of 512 trillion won.

The government earlier announced it would spend 49 trillion won on the Korean New Deal by 2022 and 114 trillion won by 2025.