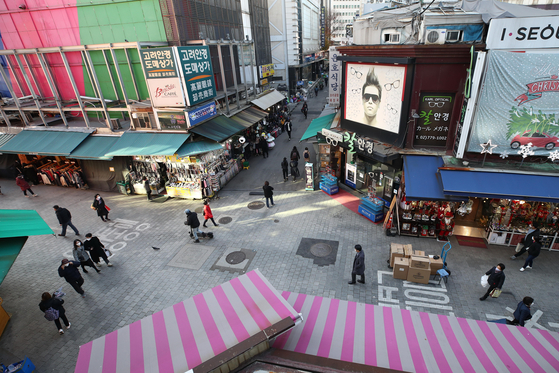 Just when Korea was starting to see the light at the end of the tunnel, October arrived with a slew of statistics suggesting that the earlier uptick was but a blip.

Industrial output fell in October after a rise a month earlier. Manufacturing output, consumer spending and investment also fell after a strong September.

Services were up on month, as social distancing was eased, but that is expected to be a short-lived recovery as the number of confirmed daily cases popped above 500 again.

According to Statistics Korea on Monday, overall industrial output in October fell 2.7 percent year-on-year, a turnaround from the 3.4 percent increase in September.

The government said September's output increase was a positive sign as it was the sharpest year-on-year increase since February before the outbreak started to surge.

When compared to the previous month, industrial output remained unchanged, a drop from the 2.2 percent month-on-month increase reported in September.

Mining and manufacturing output, compared to the same period a year ago, fell 2.2 percent, a sharp drop from the 8.1 percent increase reported in September.

According to the statistics agency, semiconductor production when compared to a year ago was up 13.1 percent. Automobile output contracted 5.8 percent.

The month-on-month decline was largely affected by the decline in semiconductor production, which fell 9.5 percent compared to September’s.

“Overall it’s not a decline,” said Ahn Hyung-joon, the statistics agency’s director on short-term economic statistics. “The production output was at a similar level as the previous month.”

The statistics agency director noted that the manufacturing output fall was the result of semiconductor export declines. But it wasn’t a sharp decline as orders in September surged on the windfall of U.S. sanctions against Huawei.

When compared to the previous year, service output declined 2.5 percent, indicating that many restaurants and retail businesses have been affected by Covid-19.

Restaurant and accommodation output shrunk 15.1 percent in its revenue.

The statistics agency said the easing of social distancing helped. Between August and September, the government raised the social distancing regulations due to the first resurgence resulting from an outdoor protest held in central Seoul on Independence Day on Aug. 15.

That regulation was in effect through Oct. 11.

With the coronavirus pandemic continuing, people have been tightening their purse strings.

Facility investment last month dropped. When compared to a year ago, it declined 1 percent. On month, it was down 3.3 percent.

The biggest contributor was the decline in transportation investment, which fell 10.3 percent year-on-year and nearly 15 percent on month.

The Bank of Korea last week revised its outlook for this year from a 1.3 percent contraction to 1.1 percent decline.

Gov. Lee Ju-yeol during last week’s press briefing said the second resurgence and the stricter social distancing guidelines reimplemented could have a major negative impact on the Korean economy, especially on consumer spending.

He projected that it could even be worse than the first resurgence in August.