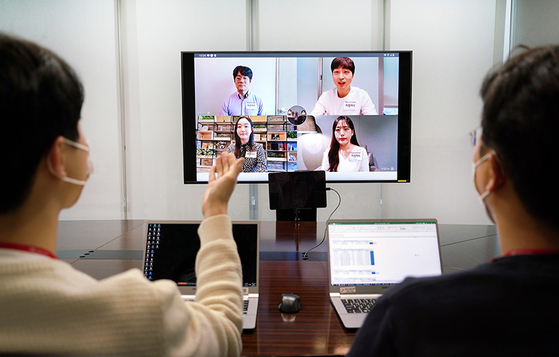 Things had to change dramatically this year, as companies wrestled with the concept of socially distant recruitment. When the spring recruitment season began, the first Covid-19 spike was already well underway in Korea.

According to a study from job search website Incruit released this month, three among four job seekers experienced “untact” hiring methods during the year’s first half. Video interviews were the most common form, with half of respondents having experienced them, followed by 20 percent who took tests online.

One of the most iconic events that represented this shift was Samsung Electronics taking its infamous aptitude test online. The test, a staple of the recruitment system since 1995, is taken by tens of thousands of people every year, with many applicants even attending special cram schools to prepare for the Samsung recruitment process. This was the first time it had ever been done online.

“On the first day of the exam, there were applicants that seemed to be frustrated due to the changed approach, but the group on the second day seemed a little more stable after listening to what the first group had gone through,” Samsung said.

Every test taker was required to sit in front of a camera during the two-hour test. Samsung had monitoring agents watch them for signs of cheating.

“I did feel there was less pressure, but as a person that prepared for the traditional procedure and methods of recruitment, the overall experience was also a bit confusing,” said a 24-year-old candidate surnamed Kang who took part in the session. “I also felt a little uneasy to think that the entire process would be recorded on video.”

Yi Han-ro, 27 years old, had to talk to artificial intelligence (AI) software for some of his interviews. He was given short quizzes and questions on how he would react under certain scenarios.

“The experience was closer to a simple Q&A, rather than a conversation,” he said. “It made me less nervous for sure, but at the same time, I wondered ‘can this software really evaluate what kind of person I am?’”

Candidates’ reactions to online interviews are mixed. The time saved traveling and money saved on things like professional makeup and hair services are obvious advantages, but seven among 10 job seekers told job search website Saramin that online interviews made them nervous, mostly because they didn’t know how to prepare.

Despite the change after the coronavirus outbreak, HR managers said interviews are still weighted at about 76 percent in terms of importance in the recruiting process, according to a separate Saramin survey.

In its latest open recruitment drive in June, SK Telecom held an online group interview via connected tablets using its group call solution. Interviewees were sent a kit including the tablet device which was later collected by the company.

“Covid-19 did bring changes like the adoption of non-contact interviews or halting group interviews. This shows that the essentials remain the same: Interviews still hold the same importance in the hiring process. Basic interview skills like emphasizing you fit the job and organization will decide the results,” advised Saramin’s PR manager Lim Min-wook.