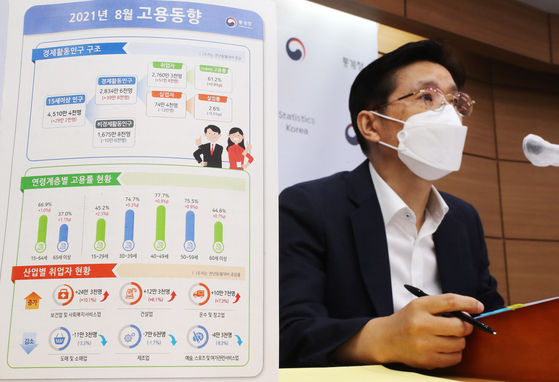 
A total of 27.6 million people were employed in August, up 1.9 percent on year, the sixth consecutive month in which the number of jobs rose and the fifth month in a row in which gains were above 500,000.

The government says the increased employment figures are a sign of steady economic recovery even as the country grapples with a fourth wave of the Covid-19 pandemic, but tightened social distancing regulation continue to affect major employers in the service industry including coffee shops, restaurants and hotels.

According to Statistics Korea on Wednesday, there were 518,000 more with jobs than a year ago.

The seasonally adjusted unemployment rate in August was 2.8 percent, a drop from 3.3 percent in July. The rate has been falling since peaking at 5.4 percent in January.

“The number of jobs is now a step closer to the level before the [Covid-19] quarantine crisis, which was in February 2020 as the job recovery has continued since February [2021],” said Finance Minister Hong Nam-ki in a Facebook post on Wednesday. “We are on a recovery path despite the fourth wave of Covid-19.”

Hong said one of the unique characteristics of the job market recently is that the impact of the Covid-19 pandemic on the face-to-face service industry has dropped significantly.

“Wholesale, retail and restaurant and lodging industries continue to struggle due to Covid-19,” Hong said. “But when seasonally adjusted, jobs have increased.”

Health and welfare service jobs were the biggest contributor to the ongoing improvement in job numbers.

In August 243,000 more people worked in the industry, which is a 10.1 percent year-on-year increase.

Jos in the construction industry have also increased, with 123,000 more people working, up 6.1 percent.

The expanding online shopping market has contributed to jobs in the logistics industry, where 107,000 more people were employed, up 7.3 percent.

Thanks to the increasing role of technology, 75,000 more jobs were created in the industry, up 8.9 percent.

However, Covid-19 and the tightened social distancing regulations continue to impact the services sector.

Arts, sports and leisure service businesses continued to see the number of people working shrink. Last month there were 43,000 fewer people with jobs, down 8.3 percent.

But the service industry wasn’t the only one that saw job losses as the manufacturing industry declined 1.7 percent year-on-year, or 76,000 fewer than a year ago.

By age, people that are 60 years old or older continued to enjoy the biggest increase in jobs thanks to government-funded job programs.

In August there were 377,000 more people in that age bracket employed, a 7 percent increase, the biggest among any age group.

Those in their 40s and 50s also saw a slight increase compared to a year ago.

The statistics agency blamed shrinking jobs in the manufacturing industry.