A typhoon off the east coast of Taiwan is expected to pass through the Korean Peninsula this week, the state weather agency said Sunday.

Typhoon Bavi is on course to reach waters about 270 kilometers (168 miles) south of Seogwipo on Jeju Island by 4 a.m. Wednesday, and then to continue its northward movement along the country's west coast, the Korea Meteorological Administration (KMA) said. 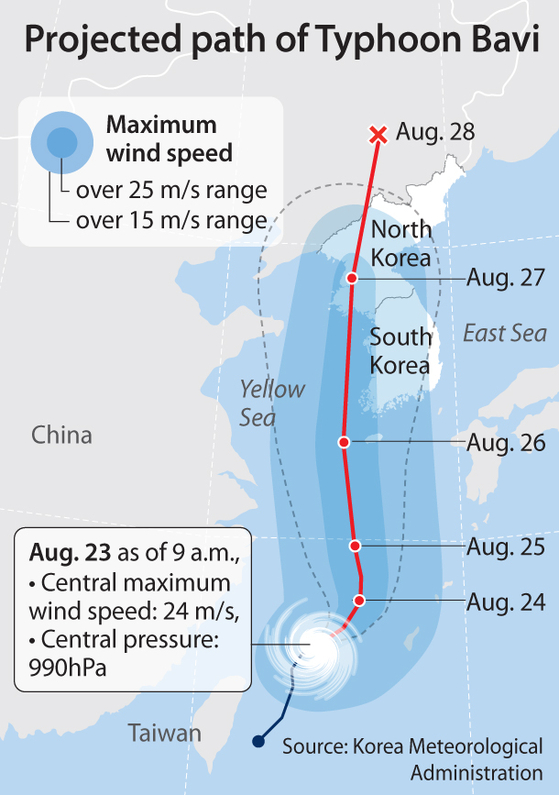 On Thursday morning, it will likely move northward along the west coast to reach close to Seoul and the surrounding areas, accompanied by strong winds and heavy rains. On Thursday afternoon, it is expected to land in Hwanghae Province of North Korea.

The KMA predicted that between Wednesday night and Thursday morning, Jeju Island and South Korea's southwestern province of South Jeolla could face strong gusts of wind. Rains could start falling on Jeju as early as Monday, with the entire country likely to receive showers on Wednesday.

As of 3 a.m. Sunday, Typhoon Bavi remained modest in size, though it could become much stronger by the time it reaches Korea, the KMA warned.

Parts of South Korea are still recovering from its longest-ever rainy season.

KMA chief Kim Jong-seok said Typhoon Bavi is expected to do most of its damage with wind rather than rain, and called for safety measures to be put in place, especially in coastal areas.