With Typhoon Bavi forecasted to pass by Jeju Island from Wednesday morning, the island began to experience strong winds from Tuesday. The typhoon was projected to move northward and pass close to Seoul Thursday morning. [YONHAP]

Typhoon Bavi will bring the southern regions of Korea gusty winds that could knock people off their feet by Wednesday afternoon, the Korea Meteorological Administration (KMA) said Tuesday.

The typhoon was forecast to pass west of Jeju Island between 9 a.m. and 9 p.m. Wednesday, with maximum wind speeds between 45 and 47 meters per second (100 to 105 miles per hour).

With the radius of the maximum wind (RMW) reaching around 430 kilometers (267 miles), southern coastal areas including Mokpo in South Jeolla were also forecast to come under the influence of the typhoon by Wednesday afternoon.

The typhoon will pass close to Seoul on Thursday morning, at which point it will still maintain a maximum wind speed of 39 meters per second. 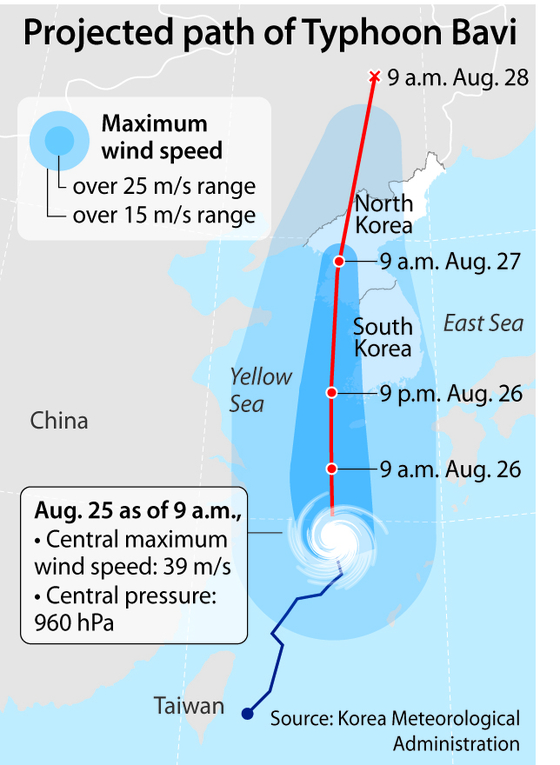 The typhoon, which formed off the east coast of Taiwan on Saturday, passed by Tokashiki Island in Okinawa, Japan, on Monday evening, bringing torrential rains of 191.5 millimeters, according to Japanese weather authority.

The KMA on Tuesday afternoon issued typhoon, strong wind and heavy rain advisories for Jeju Island, and a strong wind advisory for South Jeolla through Thursday.

The typhoon, forecast to move northward and pass close to the North Korean capital of Pyongyang by Thursday morning, was expected to weaken into a tropical storm by 9 p.m. Thursday, according to the KMA.

Korea experienced its longest rainy season recently, which lasted 54 days and concluded on Aug. 16, surpassing the record of 49 days in the summer of 2013. At least 37 people were killed and five others went missing in torrential rains.