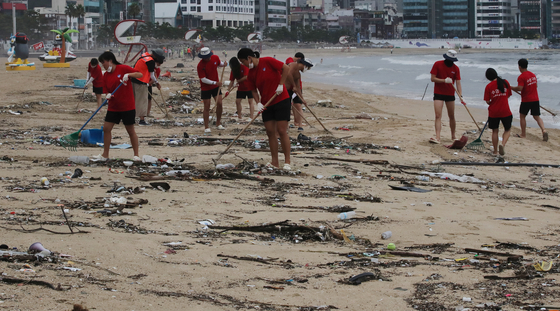 
No deaths were caused by Typhoon Bavi's passage by Korea Wednesday and Thursday, but its strong winds damaged hundreds of houses and other structures.

A 34-year-old resident of Paju, Gyeonggi, was injured on a street in his neighborhood in Wadong-dong around 5:46 a.m. on Thursday when a metal object dislodged from the top of an apartment building hit his head.

No other injuries were reported in the typhoon’s wake.

As the Korea Meteorological Administration (KMA) had warned, the southern regions took the brunt of the typhoon.

As of Thursday morning, reports of damaged homes, buildings, street lights and other structures numbered at least 144 on Jeju Island, 101 in South Jeolla, 68 in Gyeonggi and 56 in Incheon. 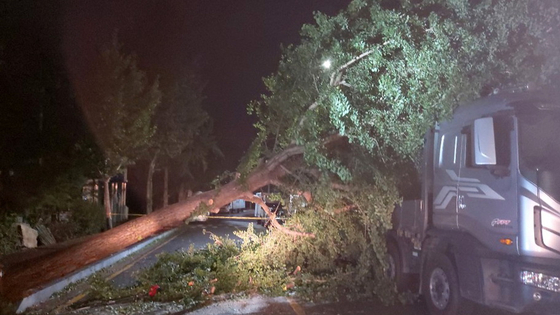 Workers working on moving a fallen tree off a road in Gwangju on Wednesday evening. [NEWS1]


In South Jeolla, it rained some 50 millimeters (2 inches) for an hour from 8 p.m. Wednesday, flooding some streets in Gagok-dong, Yeonhyang-dong, Deokwol-dong and Jorye-dong.

A 3-meter-wide (10-foot-wide) sink hole formed near a construction site in Seo District in Gwangju that evening, and a tree came down in Munheung-dong, crashing into utility poles, leading to a blackout of 2,100 households in the area.

Some 30 residents of Gokseong County, South Jeolla, were evacuated overnight over fears of a landslide. A massive landslide in the area earlier in the month killed five people, most of them in their 60s and 70s. Luckily, no additional landslide occurred. 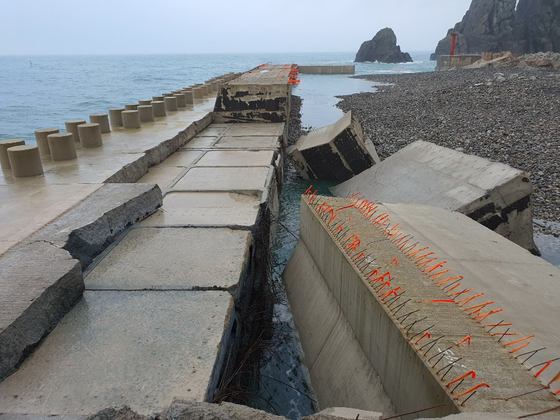 Part of a sea wall in Gageo Island was destroyed over the night as Typhoon Bavi passed. [YONHAP]


Some 300 meters of a sea wall on Gageo Island, southwest of Mokpo in South Jeolla, were lost in high waves. The structure, 30 meters high, had cost 3 billion won ($2.5 million) to build, according to the local county office.

Some 1,170 households in Incheon, 880 on Jeju Island and 335 in South Chungcheong experienced temporary blackouts from Wednesday to Thursday.

Some 200 halibut perished at a fish farm in South Chungcheong. 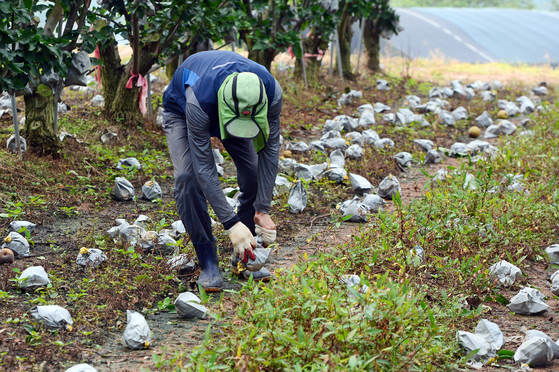 A farmer cleaning after his pear farm in the wake of Typhoon Bavi on Thursday morning in Shinan County, South Jeolla. [NEWS1]


The typhoon, which had formed east of Taiwan on Aug. 22, passed some 100 miles west of Jeju Island by Wednesday afternoon, with maximum wind speeds of 45 meters per second (100 miles per hour), moving northward and passing near Seoul around 3 a.m. Thursday, according to the KMA.

The KMA had warned the southern and western coastal regions to brace for gusty winds that could knock people off their feet.

It said Thursday that the typhoon had a weaker impact overall than it had forecast.

“The typhoon was categorized as a very strong one, but because of its sheer strength, its perimeter of direct impact was shaped less like an oval, which most typhoons have, and more like a perfect circle,” said Yoon Gi-han, an official at KMA. “This meant that not as much of the coastal regions of Korea came under the direct impact of the typhoon.”

By 9 a.m. Thursday, the typhoon had passed into North Korea and was located some 50 kilometers (31 miles) northwest of Pyongyang. 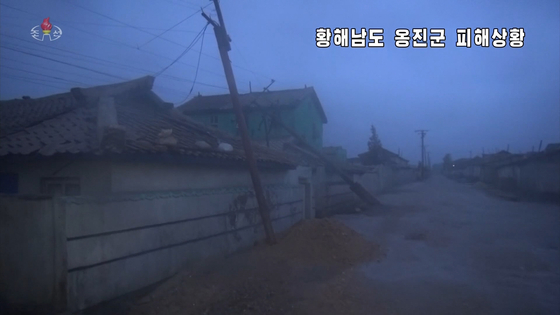 The KMA lifted nationwide typhoon alerts by Thursday morning, and heat wave advisories were issued in most regions by the afternoon. Temperatures hit 35.5 degrees Celsius (95.9 degrees Fahrenheit) in Gangneung, Gangwon, 30 in Jeju Island, 28.2 in Seoul, 27 in Busan and 26.7 degrees in Incheon.