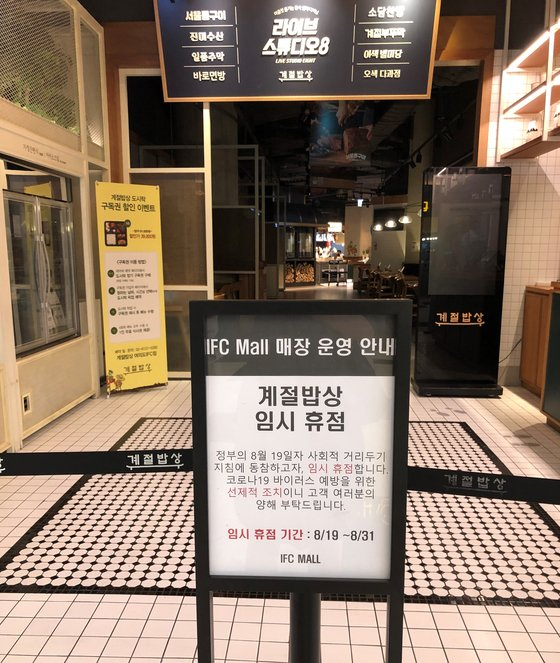 
Buffet operators are stumped and a bit insulted that their restaurants have been classed together with clubs and bars with table hopping and labeled as high risk locations for coronavirus transmission.


Cafes, they argue, are just as risky as buffets, yet they have not been ordered to close through Aug. 30.

The orders came from the government on Aug. 18 after the number of coronavirus cases started to increase rapidly again. A total of 12 types of businesses were covered, including buffets.

The next day, CJ Foodville closed its 29 VIPS restaurants in Seoul, Gyeonggi and Incheon, as well as 12 Season's Tables branches.

Shinsegae Food on the same day shut three branches of Bono Bono, which offers a seafood buffet, and two branches of Olbaan, a Korean buffet restaurant chain. Elandeats closed a total of 109 buffet restaurants, including brands such as Ashley, Pizza Mall and Nature Kitchen.

While the buffets have been shut, buffet operators note that cafes have been hot spots.

Starbucks Korea’s Yadang branch in Paju, Gyeonggi, reported a total of 65 infections as of Monday after an infected person visited the branch on Aug. 8. The cafe restarted service on Aug. 21 and is currently accepting visitors again.

According to food companies running buffets, they have been doing everything possible to protect their customers. They have installed heat-sensor cameras to check the temperature of visitors and registered them with QR codes, and have been leaving some distance between tables.

“While a number of infection cases were reported from Starbucks, I don’t understand why the government is tightening regulations only for buffets,” a man from the food industry who wished to remain anonymous said. “The situation is particularly muddled now as the coffee shop actually reopened and has been accepting customers."

With the sudden command to closure, buffets were forced to waste raw materials, such as vegetables, seafood and meat, prepared in advance. The restaurants, although they shut down the stores, still have to pay fixed costs, such as rent and payroll. 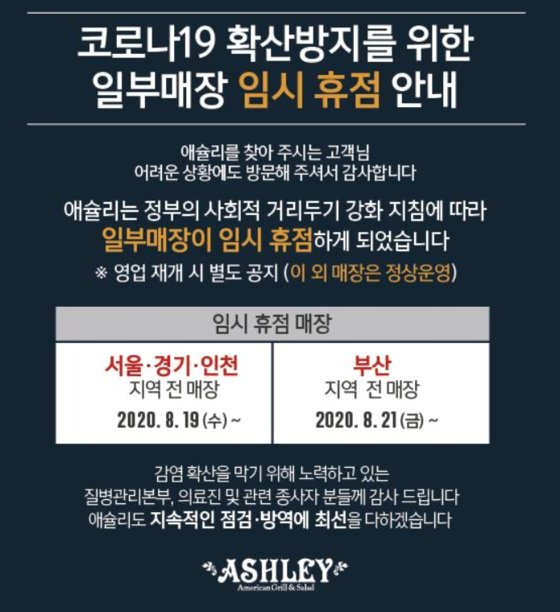 A screen capture of Ashley’s website saying that all of its branches in Seoul, Gyeonggi, Incheon and Busan, are temporarily shut down. [SCREEN CAPTURE]

As a part of efforts to minimize financial damage, food companies are rotating their employees who work at buffets to some of their other non-buffet locations.

“We agree that it’s right to follow the government’s measure as the situation is becoming more serious,” a spokesperson for CJ Foodville said. “However, we are very concerned about the public’s attitude toward buffets that they would consider it as a high-risk place and it would eventually affect the restaurants’ sales in negative ways.”

Food companies are already suffering, with CJ Foodville losing 5 billion won ($4.21) million in the first half.

The hotel industry is also being hit.

Hotels in central Seoul, such as Hotel Shilla, Shinsegae Chosun Hotel and The Plaza Hotel, recently closed their buffets as well. They are currently in discussions to provide alternative services for customers with buffet reservations.

“Our buffets were popular among people who work in nearby offices in Gwanghwamun, Seodaemun District, Mapo Distirct and Yeoksam-dong,” a spokesperson for Shilla Stay, a Hotel Shilla brand, said. “However, we are now concerned about a sharp drop in sales due to the sudden closure.”

According to Seo Yong-gu, a professor of business administration at Sookmyung Women’s University, buffet restaurants expected to see a long-term struggle from the second wave of Covid-19.