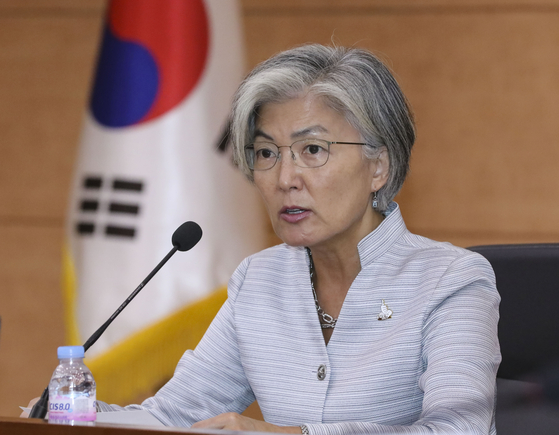 
Foreign Minister Kang Kyung-wha on Monday apologized for sexual abuse allegations against a Korean diplomat posted in New Zealand in 2017.

Kang addressed the controversy in a videoconference with senior ministry officials and said, “I am sorry for causing concern to the public.”

She admitted that the issue “has become a diplomatic burden for the government,” according to the Foreign Ministry in a press release.

The senior Korean diplomat has been accused of groping a male staff member in late 2017 on three separate occasions.

The diplomat left his post in Wellington, New Zealand, in February 2018 after being summoned home by the Korean Foreign Ministry. He denied the allegations in an internal investigation by the ministry. The ministry took disciplinary action against him, and he received a one-month pay cut. The diplomat has been serving in the Philippines since.

The Korean Foreign Ministry has been accused in media coverage in New Zealand of mishandling the case and not cooperating with the investigation.

The diplomat was eventually recalled from the Philippines earlier this month. He is currently undergoing a two-week self-quarantine period upon his return to Seoul.

Kang said in the meeting that the Blue House through its probe “found problems with the Foreign Ministry’s response” to the matter from its initial handling of the case to the leaders’ phone conversation on July 28.

She added that the Foreign Ministry will “promptly take appropriate measures” in response.

Kang sternly warned that any sexual misconduct cases involving diplomats in the future will face stricter penalties “regardless of when it occurred.”

She added that “communication with New Zealand will be bolstered in order to resolve this case in a just manner.”

Kang vowed that “in order to prevent such a disgraceful case from happening again,” heads of missions should pay more attention to managing their staffs and “demonstrate model behavior.”

Police investigations in New Zealand were launched into the case last year, and a Wellington district court issued an arrest warrant for the diplomat on Feb. 28, charging him with three counts of indecent assault. The diplomat has consistently denied the allegations.

Kang vowed to eradicate sexual misconduct and proclaimed a zero-tolerance principle in 2017, after the Korean ambassador to Ethiopia from 2014 to 2017 sexually harassed a female local staffer and two other women.