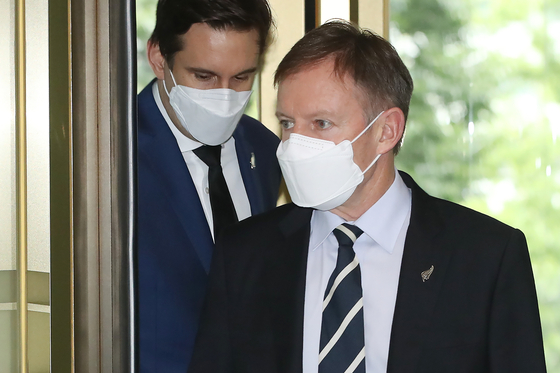 
A Korean diplomat accused of sexually assaulting a local staffer at the embassy in New Zealand in 2017 has been ordered by the Foreign Ministry to return to Seoul immediately.

"We issued an order for him to return home immediately as of today,” a senior Foreign Ministry official told reporters in Seoul Monday. “This is a personnel measure taken in response to bringing about various controversies.”

The senior Korean diplomat, who was at the time assigned to the Korean Embassy in Wellington, is under investigation by New Zealand police after he was accused of groping a male staff member in late 2017 on three separate occasions. The diplomat's name has been withheld in Korea.

Korea plans to cooperate with the New Zealand government in the investigation, short of waiving diplomatic immunity.

“New Zealand has said that the correct way to resolve this issue is through juridical proceedings,” said the Foreign Ministry official. “If the New Zealand side makes an official request, we are willing to cooperate in accordance with the procedures for mutual legal assistance on criminal matters and extradition.”

However, he added that New Zealand has yet to make such an official request.

The case has received renewed attention since New Zealand Prime Minister Jacinda Ardern raised the issue with President Moon Jae-in during a July 28 phone conversation. Moon said that the relevant authorities will handle the matter “after confirming facts.”

The diplomat left his post in Wellington in February 2018 after being summoned by the Korean Foreign Ministry. He denied the allegations in an internal investigation by the ministry. The ministry took disciplinary action against him, and he received a one-month pay cut. The diplomat has been serving in the Philippines since then.

After he left the country, New Zealand police launched an investigation into the allegations last year, and a Wellington district court issued an arrest warrant for him on Feb. 28, charging him of three counts of indecent assault. The diplomat has consistently denied the allegations.

But the issue has gained publicity in New Zealand through local media as well, with reports of the Korean government not being cooperative with the police investigations.

New Zealand Foreign Minister Winston Peters in an interview with local media Saturday urged for the Korean government to waive the diplomatic immunity of the diplomat and to return him to the country to assist with the investigation. He said they have taken the issue to the “very highest level” between the two countries' foreign ministries.

However, the ministry also said that it was “regrettable” that the New Zealand government took the matter to its local media without trying to resolve the issue diplomatically first.

“Raising the issue abruptly during the leaders' phone call last Tuesday can be considered very unusual under diplomatic practice,” a senior Foreign Ministry official told reporters, noting that there had been no prior diplomatic consultation to include the matter on the agenda of topics to discuss between the two leaders.

The official confirmed that the accuser first raised the allegations in December 2017, and that a warning was issued by the ministry against the diplomat following an internal review by its personnel committee. He added that there were no further complaints filed by the victim when the diplomat was summoned back to Seoul in February 2018.