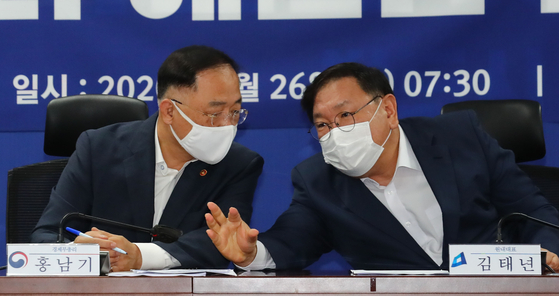 
The ruling party and the government has agreed to allocate a minimum of 20 trillion won ($16.9 billion) of next year’s budget to the so-called Korean New Deal, the Moon Jae-in's ambitious project to create jobs, especially for young people.

During a meeting Wednesday, the Democratic Party and government agreed to finance 10 leading projects including a "digital dam" that maximizes the use of data, the foundation of the future digital economy, as well as so-called green smart schools, cars of the future and green energy. They are part of President Moon's Korean New Deal.

The two parties agreed to expand the budget for vouchers to support small local businesses from this year’s 9 trillion won to 15 trillion won. They also agreed to fund 190,000 government-leased housing units for young people and newlyweds while accelerating free education for all high school students in public schools a year earlier than planned, in 2022.

The priorities for next year’s budget is economic recovery through changes to the fundamental economic structure through the Korean New Deal, while expanding the social safety net and job security.

“Government spending is the key to an economic recovery,” said Democratic Party floor leader Kim Tae-nyeon, noting that no one currently knows when the coronavirus pandemic will end or a global economic recovery will start.

Finance Minister Hong Nam-ki said the government will propose an expansionary budget for next year, agreeing that government spending is central to overcoming the coronavirus crisis.

He said the budget will vividly demonstrate the government’s determination to “protect and create two million jobs” and support the economy in general, from spending to public investment as well as exports and local economies.

Hong stressed that while past budgets targeted national projects that took three to four years, next year’s budget will advance the timetable of some policies for immediate implementation, such as free education for all high school students in public schools.

Since the second quarter of last year, 440,000 high school seniors’ tuitions have been paid by the government.

The government initially planned to expand that to all students by 2022. The date was pushed up to next year.

Tuition is free for elementary and middle school students in public schools.

According to the government, annual average expenses for a single high school student is 1.58 million won, which includes tuition and text books.

Making education free is expected to help households have an additional 130,000 won of disposable income a month.

The government in June proposed a 542.9-trillion-won budget for next year, a 6 percent increase from this year’s.

The government next week will be holding a cabinet meeting that will approve a final version before submitting it to the National Assembly on Sept. 3.

A recent resurgence of the coronavirus has dampened expectations of an economic recovery in the third quarter.

During a cabinet meeting on Tuesday, President Moon Jae-in expressed concern over the resurgence of the virus and the impact it would have on the economy.

“Red lights have been lit not only in quarantine [efforts] but also on the economy with the resurgence of the coronavirus,” Moon said. “We have been evaluated as the most successful economy among Organisation for Economic Cooperation and Development [OECD] countries for successful quarantine efforts and expansionary fiscal policies,” he said. “The government goal is a recovery in the third quarter. But [I am] concerned about a delay in the speed of the economic recovery and additional economic difficulties as a result of the recent resurgence.”