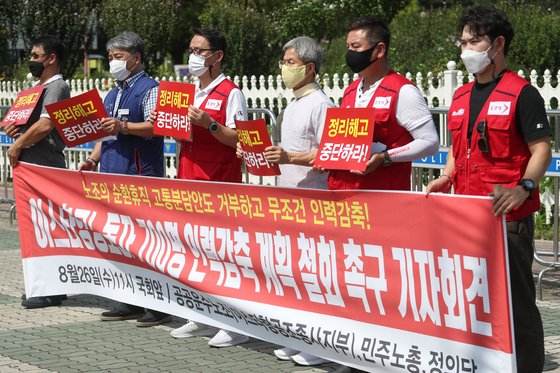 Eastar Jet’s pilot union holds a press event in front of the National Assembly in Yeouido, western Seoul, on Wednesday, demanding the airline withdraw its plan to lay off 700 workers. [NEWS1]


Cash-strapped Eastar Jet’s pilot union demanded the airline withdraw a plan to lay off 700 employees, adding that it still needs to deal with the unpaid wages it has owed its employees since February.

After Jeju Air abandoned a takeover of the airline last month, Eastar Jet has been in talks with a private equity company to buy the business, according to Eastar Jet’s pilot union. The union said the airline’s financial status has rapidly aggravated since the Covid-19 outbreak earlier this year, and it has recently announced a major restructuring of the workforce.

There are 1,136 employees at Eastar Jet in total. The airline will start accepting voluntary resignations ahead of layoffs in September, according to the pilot union. The layoffs follow Eastar Jet’s plan to return eight more aircrafts, on top of the nine it returned in the first half of this year. The airline will then be left with six aircrafts.

“The labor union suggested pushing forward the resale [of Eastar Jet] and rotational unpaid vacation as part of the self-help measures to distribute the pain [of the financial struggles], but the company ignored the suggestion and is insisting on a major layoff,” said a pilot union member during a press event held in front of the National Assembly in Yeouido, western Seoul, on Wednesday.

“The company and its owner Lee Sang-jik, a Democratic Party [DP] lawmaker, are not presenting any countermeasures about the wages that have been unpaid for seven months. They turned a deaf ear to the labor union’s request to register for employment maintenance subsidies due to the small cost,” wrote the pilot union in a statement Tuesday afternoon. “Instead of leaving it to the corrupt owner and the management, the government should actively engage in giving out directions and supervision for support.”

Eastar Jet recently chose Deloitte Anjin LLC and Yulchon LLC and Heungkuk Securities as the lead managers for the sale.