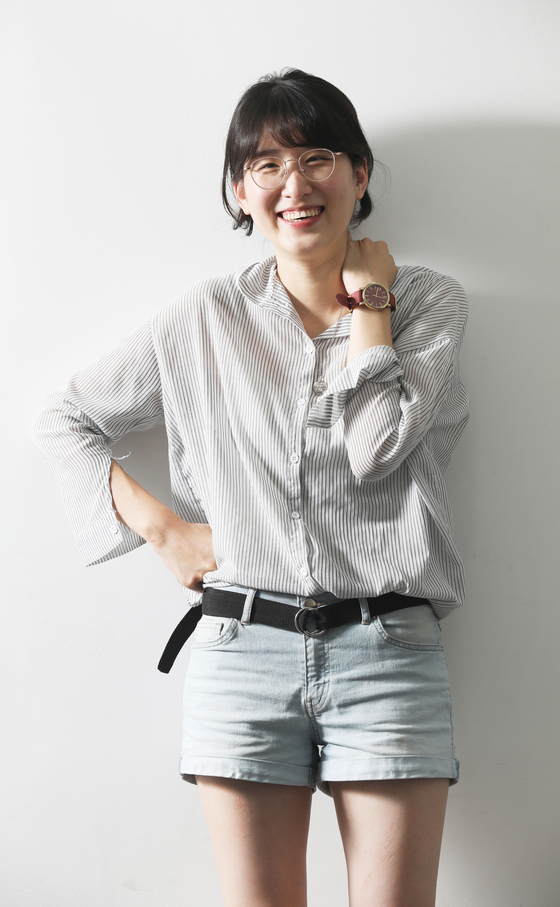 
When director Han Tae-ee first bought a secondhand camcorder, she had no intention of filming a documentary about her mother, Choi Mi-kyeong.

But with her mother there, right at their home, and Han's desire to find out the differences between the pair, a documentary was exactly what was made.

“It’s so strange, for me to become a person so opposite from the person who raised me, so I decided to follow her along and film her,” Han said in a recent interview with the Korea JoongAng Daily about her debut documentary film “Welcome to X-World,” which was awarded the Grand Prize in the Festival Choice competition in the 17th EBS International Documentary Film Festival.

The director admitted that she had initially wanted to “change” her mother, who raised her and her brother alone, and took care of her father-in-law for almost two decades, after her husband died more than a decade ago. 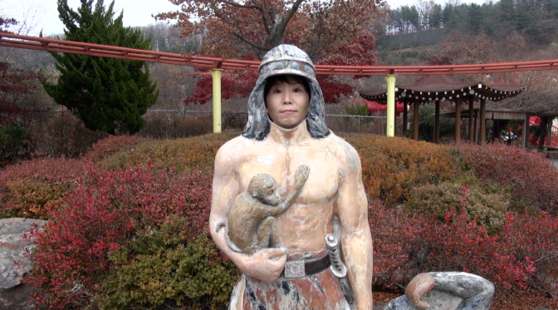 Han's mother, Choi Mi-kyeong, the protagonist of the documentary "Welcome to X-World." The documentary is scheduled to be released at theaters nationwide in October. [EIDF 2020]


“What I thought about myself was that I was brave, free-spirited and independent, whereas my mom was softhearted, passive, and I thought she was somehow caged in her own world,” Han said. “I thought I had to impact her in some way. I tried to get her to experience new things, like doing hookah together. I wanted to show her that there’s a world with so much fun out there, and that she didn’t need to be so confined to household chores.”

When Han's grandfather suddenly asked them to move out, she was overjoyed to find a home for herself and her mom, but her mother, on the other hand, was pessimistic.

“When I was younger, and when I saw how down mom remained after hearing the news, I merely thought it had to do with financial problems,” the director said.

To her surprise, however, money wasn’t the problem. The film zooms into the mother and daughter’s journey of apartment hunting and what it means to be a family.


How did you initially think of your mother?
I thought she was a very weak person. When something bad happened to us, I acted nonchalant, but inside my mind, I was panicking. But since my mom was also panicking, if I showed how anxious I was, I thought it would really turn into trouble. So I would tell my mom that this is nothing, everyone goes through something like this. That’s how I saw my mom — as a delicate, tender person. I was always worried that she would get hurt by others. But after filming her and looking back on her past, she has already experienced and handled situations and things that I could never possibly manage. What I felt [after this film] is that my mother is strong and a really cool person.


Have you ever asked your grandfather why he asked you and your mom to move out?
My grandfather is very peculiar. His way of thinking is very unique and it’s been a long time since I became curious about his actions. For instance, when I was in elementary school, I was really scared of bugs. But he would come to me with the biggest smile on his face, truly happy to present me with a cricket on my hand. It’s not that he’s cruel or being mischievous — he was just really happy to give it to me, and didn’t understand my reaction when I screamed and withered away. He is different from me and my mom.
It was the same with my room [in the film]. One day he just took away the door of my room, and it was like he did it as a surprise for both of us. From my stance, my room had suddenly disappeared, but he was like “Isn’t this great?” because we had more space for our whole family. So I’ve just learned through [years of experience] that it would be unhealthy for our interaction to question his reasons behind every action. When I heard that he asked us to move out, it wasn’t “why,” that popped into my mind, because I was just so happy that we could. 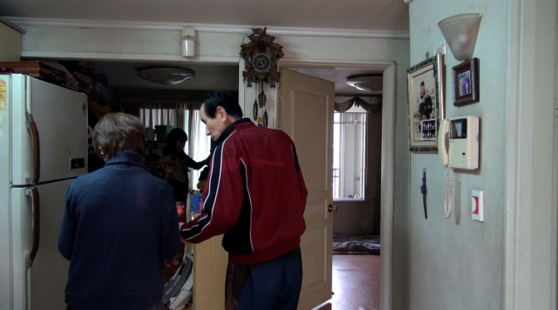 A scene from the film. Choi and her father-in-law, Han Heung-man together before the family moved out of his home. [EIDF 2020]

Why wasn’t your mom happy after hearing the news?
I didn’t understand how she felt at first. When I was younger, I thought it was due to our financial problems that we had never discussed when we were going to move. Only when we started to prepare for the move I asked her why she was feeling so down. And she said that she thought that she was going to live here forever, taking care of our grandfather. So when she first heard him [ask us to move out], she was sad. She thought that we were a family— although we still are today — and she wanted to live with him. And she was worried about how he would take care of himself, alone.


In the film, your mom initially says that her life was “wrecked” by marriage. But she still wants you to marry. Has her stance changed since then?


A few days ago when we were holding an online panel with an audience, someone asked the very same question. She answered that although her married life was hard, and there was my dad’s accident, that nowadays, after seeing how  my brother and I grew up to be, we’d grown up so well, and she could feel that she has become stronger. What she felt as she raised us and how she connected with in-laws changed her [for the better], so now, she doesn’t think of marriage as a difficult time for her, and she said that she wanted to marry again even if she was reborn [in another life].
Now, she says that she doesn’t care who I marry, as long as I do. I found it to be very ironic. It’s shown in the film, and my mom is someone who’s very conventional and used to following the customs — she’s not that open [to variations], but in order to reach the purpose of her daughter’s marriage, she widened the range to say that she would even allow a foreigner or a 20-year age gap. I always found her answer very funny. [But] I realized how much value she puts on marriage. She still says she wants me to marry because she wants me to feel the comfort that is only given through having a family [of my own] and there are responsibilities and emotions that can only be grasped through marriage.


Although you guys found a home for yourselves, you still live within a five-minute walking distance from your grandfather. Does she still visit him often?
Right after we moved out she used to visit his home three to four times a week — to bring him side dishes and organize his laundry. She worried if he was getting a handle of the household chores. But after she saw that he was doing well, the time between her visits lengthened. But she still visits him [at least] once a month. We also call him often and that’s how we’re maintaining things.


You two seem really close. Have you ever thought about what your relationship with your mother is like and has anything changed since after you filmed the documentary?


I thought long and hard about why we were so different. I’m more emotional than rational, I don’t like to be confined to things. I’m not afraid to travel alone or try out new things. The basis of that lies in my trust of my mom. Even if everyone else in the world didn’t understand me, she would always be there, trusting me without asking any questions. [Knowing that] makes me feel secure, grounds and rooted me to grow up to be the person I am today. I think of us as a really good team.
So I was even more embarrassed that I tried to change her. Even though I’ve lived with her for twenty-something years, I’ve made judgments on the mother that I knew only from the outside. Since we’re family, we didn’t really talk about what kind of person she was and what thoughts she had. But after filming her, I really had to see her through a different lens and that made me really focus on her. What I realized was that we impact each other so much, and that’s how I was formed and that’s how my mother became the person she is today — so it was foolish of me to think [that the influence] was one-way.