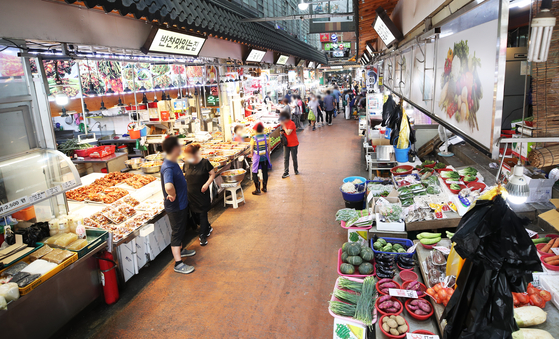 A traditional market in Suwon, Gyeonggi, is emptier than usual on Monday after the government raised its social distancing guidelines to Level 2 in its three-tiered system on Sunday. [YONHAP]


For some small business owners and self-employed workers in Korea like Kim See-dong, who runs a coin noraebang, or singing room, in Guro District, western Seoul, the recent government directive to shut down certain businesses to contain the Covid-19 outbreak was the last straw.

“After we were forced to shut down for 50 days in late May under the Seoul city government’s directive, my wife and I couldn’t afford hiring a part-time worker, so it was just the two of us manning the store day and night," Kim said on Monday. "Since we were allowed to reopen, we’ve been so meticulous in sticking to the disease prevention measures. But all our efforts are down the drain now with the shutdown order.”

With a dramatic uptick in the number of Covid-19 cases this month, the government has issued a directive for several “high-risk” businesses to be closed, including clubs, bars that involve dancing and moving between tables to mingle with others, door-to-door sales businesses, large hagwon (private cram schools) with 300 students or more, buffets, noraebang and internet cafes.

The measure went into effect on Aug. 19. The businesses were given a grace period until Monday to comply with the order, which is expected to last at least through Aug. 30. 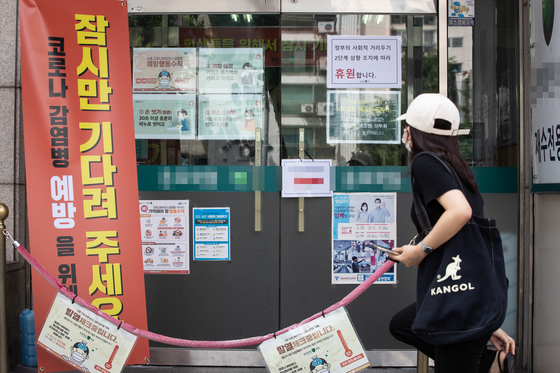 The doors to a hagwon, or a private cram school, remain closed on Aug. 19 in Yangcheon District, western Seoul, after the government issued a directive to shut down certain businesses deemed "high-risk," including hagwons, bars and noraebangs (singing rooms). [NEWS1]


Kim’s business wasn't the only one affected in Korea, home to 6.32 million self-employed people as of 2018, according to Statistics Korea. A little less than half of them have businesses in Seoul, Gyeonggi and Incheon.

Many self-employed workers in the Daegu and South Gyeongsang regions — an early hotbed of the viral outbreak in Korea from late February to April — who run those types of businesses are going through a second round of shuttered workplaces.

“For people like us who are self-employed, a temporary shutdown does not have temporary effects,” said a manager of a PC room in Changwon, South Gyeongsang, on Sunday. “Because we still have to pay our monthly rent to the building owner while we’re earning nothing. We can’t even move out of the building without incurring further losses, because we signed a contract.”

He said that he incurred a roughly 80 percent loss in sales during the outbreak in February.

“We were able to bring it back up from June, but now we’re stuck again with the shutdown order,” he added. 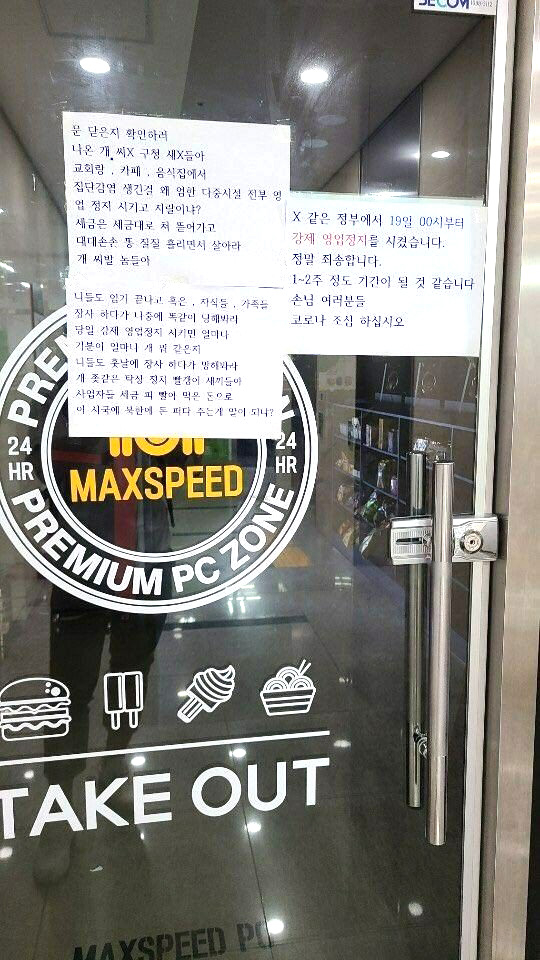 A sign placed on a door to a PC room, or internet cafe, in Korean explaining to customers that it will remain closed for about two weeks, starting Aug. 19. [JOONGANG ILBO]


“Things were looking really bad in February in Daegu, but we were able to return to some normalcy after the cases reduced considerably,” said the owner of a restaurant in the Dongseong-ro area of the city. “But now that we find ourselves going through it all over again, you cannot but wonder what good all that effort was for.”

The heightening of social-distancing measures by the government has led to a drop in customers for most businesses in general, not just for those running high-risk businesses, some owners said.

The government raised its social distancing restrictions from Level 1 to Level 2, per its three-tiered system. The stricter guidelines ban any private or public indoor gatherings involving 50 people or more, or outdoor meetings involving 100 people or more. The measure went into effect in the Seoul and Gyeonggi areas beginning Aug. 16 and the rest of the country on Aug. 23. 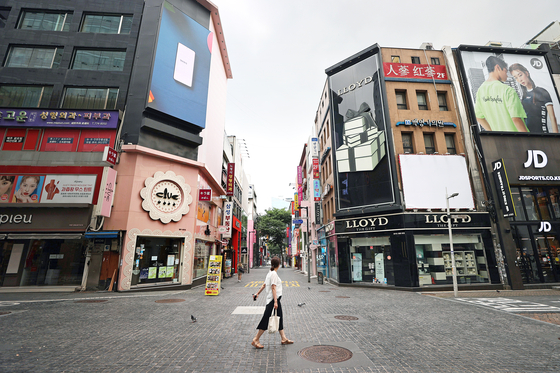 A street in the normally bustling Myeongdong shopping district in central Seoul on Aug. 20. [YONHAP]


“Ever since the social distancing recommendation was raised in Gwangju, you hardly see people out and about,” said Ahn Dong-sun, the secretary general for an association of traditional markets in Gwangju, on Monday. “I went for lunch at a traditional market today and found it nearly empty.”

Some self-employed people like Jeong, a 34-year-old owner of a restaurant in Hwacheon County, Gangwon, are trying out new ways to keep business going during the pandemic.

“We recently started providing delivery service, and we get some 20 orders for delivery food every day," Jeong said. “We took out 50 million won [$42,000] in loans from the bank in February to make ends meet. Most of that has been used up. But I cannot fold the business. We have to keep thinking of ways to keep it going, because there are employees who depend upon the business’s survival for their own.” 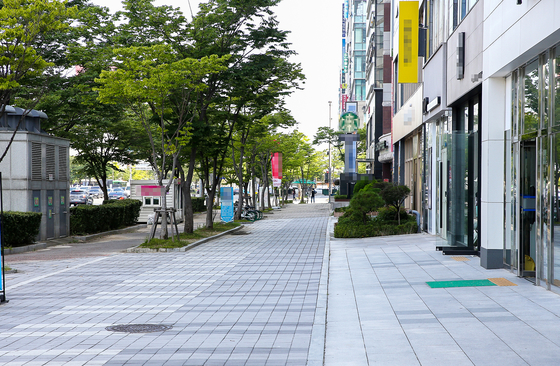 An empty street in Seo District, Gwangju, on Monday, where there has been a cluster of recent Covid-19 cases. [JANG JEONG-PIL]


Some experts are calling for more concrete measures from the government to strengthen safety nets for the self-employed and small business owners.

“There are different ways to approach it, maybe the government could fund their electricity bills or delivery services,” said Cha Nam-soo, a researcher at the Korea Federation of Micro Enterprise, an association of self-employed people in Korea.

The government spent heavily to prop up the local economy during Korea's initial coronavirus spike in the spring, and further relief programs could be more politically difficult this time around.

“If the government pays their monthly rents while they remain shut down during the pandemic, this could be a massive amount” said Nam Yoon-hyung, a researcher at Korea Small Business Institute (Kosbi). “But they are nonetheless looking to the government for some kind of redress.”

When Covid-19 infection counts spiked in Daegu in February, the city government issued emergency funds for small business owners in April, up to 1 million won per person, and helped cover the interest on loans.

Talks of setting up similar emergency funds for the self-employed throughout the country have been taking place, including during a recent meeting of the opposition United Future Party (UFP).

“The livelihood of self-employed and small business owners is seriously at stake. We need to target our next emergency funds for these people,” said Kim Chong-in, interim leader of the UFP, in a meeting with the press on Monday following the party's meeting. 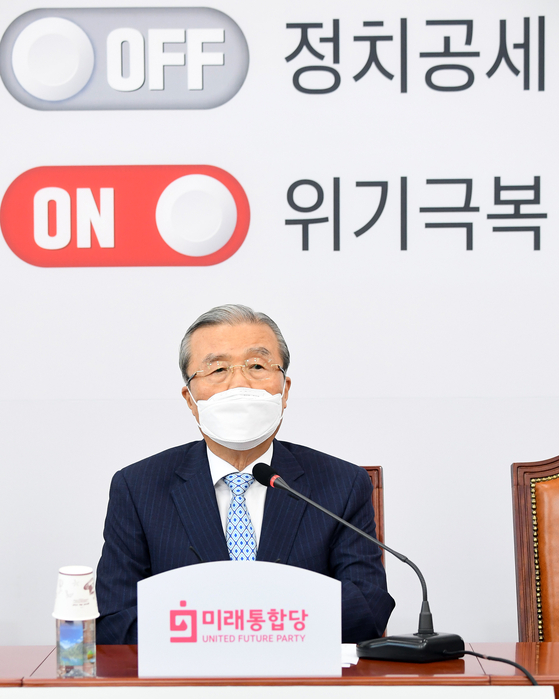 Kim Chong-in, interim head of the United Future Party (UFP), during a party meeting on Monday at the National Assembly. [OH JONG-TAEK]


Speaking during a Monday press conference at the National Assembly, UFP spokeswoman Kim Eun-hye said the party is asking the government to pay close attention to at-risk business owners.


“They’re at the verge of folding their businesses due to the pandemic and many have nothing more left to resort to," Kim said.

In a statement he issued on Monday, Lee Nak-yon, former prime minister and candidate for chairman of the ruling Democratic Party (DP), said it would be better to “postpone all discussions about the emergency relief funds” until next week.

“Now is the time to overcome the outbreak,” Lee said. “This week will be the turning point of whether Korea will face Level 3 social distancing or not. We must stop any discussion on the emergency relief payment this week and concentrate all attention on preventive measures.”